Presented at the Hellenic Residence in London on 23 March 2022

Emeritus Fellow Peter Mackridge was officially made an honourary Greek citizen on Wednesday evening, at the Hellenic Residence in London. Greece’s Ambassador to the United Kingdom, His Excellency Ioannis Raptakis, presented this monumental recognition in gratitude of 50 years of service to Greek culture.

"For 50 years, I have considered Greece my second home,” Peter told daily Greek newspaper, Ta Nea, who covered Wednesday’s ceremony. “Until recently, this was just a metaphorical expression. As of today, it has a literal meaning. It was a dream come true." 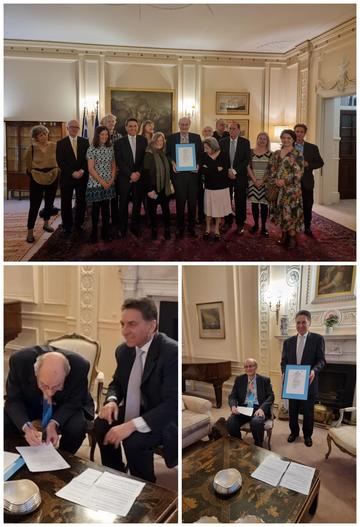 Peter was installed as an honourary Greek citizen at the Hellenic Residence in London. Photo Credit: Greek Embassy in the UK

Colleagues and friends have praised Peter, congratulating him for this recognition, and emphasizing what his work has meant to the country and its people.

“You have loved Greece in such a full, wholehearted, passionate, uncompromising way,” wrote Dimitris Papanikolaou, St Cross Fellow and Professor of Modern Greek and Comparative Cultural Studies, on the eve of Peter’s citizenship ceremony, “- at the same time, in such a ‘clear’, fair, antinationalist manner.”

“As myself a Greek in Oxford, he has been inspirational in my quest to ‘find’ my homeland,” tweeted Professor Petros Ligoxygakis. “Most of the time, Greece is making it difficult to love her. But today’s ceremony was the most appropriate way to honour Peter and his work.”

Peter joined Oxford as a Lecturer in Modern Greek in 1981. Until his retirement in 2003 and beyond, he has authored six books including Language and national identity in Greece, 1766-1976, edited hundreds more, and translated many others.

Peter is now writing his memoirs – as he revealed at Wednesday night’s event.

Today’s ceremony was the most appropriate way to honour Peter and his work.

St Cross members will be eager to learn more about Peter’s life, devotion to Greek culture – and perhaps – even about the ‘Greek gang’ who enjoyed evenings of impromptu singing and dancing around the College’s piano.

“I remember how [those evenings] was based on the sharing of a culture and of a ‘πατρίδα’ (homeland) that was for each one of us something different, yet at the same time something we were ready to share and to invite others to share,” writes Dimitris.