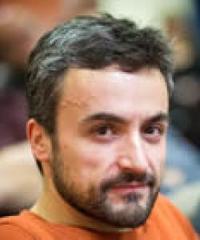 Dimitris’s research focuses on the ways Modern Greek literature opens a dialogue with other cultural forms (especially Greek popular culture) as well as other literatures and cultures; the other important strand of his research focuses on queer theory, the history of Greek queer cultures, and the difference they can make in people’s lives and social movements. He is committed to literary, cultural and gender theory and the new perspectives they offer for the study of literature, culture and society.

He has written monographs on literature and popular music in France and Greece, Cavafy and the poetics of homosexuality, and the representation of Greek family in recent film, theatre and literature.

His next major writing projects include: a book titled Greek Weird Wave: A Cinema of Biopolitics (to be published by EUP); a study of cultural responses to the current Greek socio-economic crisis; an edition of Costas Taktsis’s essays.