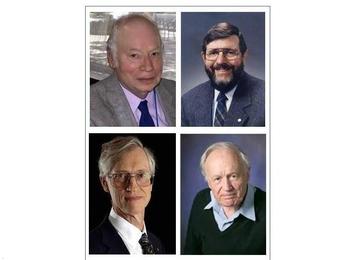 On 31st July 2020, the St Cross Centre for the History and Philosophy of Physics (HAPP) took its first plunge into the world of virtual events, marking a change from its usual one-day conferences physically held in Oxford, and the occasion could not have been more auspicious. We welcomed four Nobel Laureates in Physics and three distinguished discussant physicists for a discussion panel on "The Greatest Physics Discoveries of the 20th Century". Over 1300 attendees from around the world, hailing from every continent but one (Antarctica), took part in this online event.

Live Q&A posted online throughout the event saw dozens of questions from members of the audience with Professor Greene selecting questions to be put directly to the panel members to round off the event.
This virtual first was a huge success and it is hoped that HAPP can build on this momentum into the future.
The event demonstrated that although the barriers to meeting and interacting in person in Oxford due to the pandemic social distancing requirements may have initially proved to be a challenge in connecting the HAPP community, this new format opened up new and exciting possibilities for bringing together not only an international panel but also a global audience.

A video of the Discussion Panel event is now available at https://www.stx.ox.ac.uk/event/happ-nobel-laureate-discussion-panel.