The future of feminist foreign policy with alumna Kristina Lunz

The future of feminist foreign policy with alumna Kristina Lunz 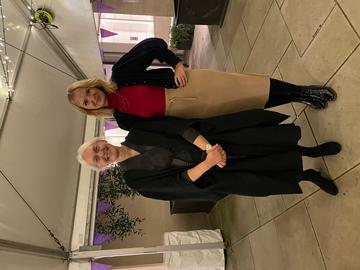 St Cross College was delighted to welcome alumna Kristina Lunz (MSc Global Governance and Diplomacy, 2014) on 13 October to give a talk on the future of feminist foreign policy to over 40 attendees of the first alumni in-person event in the Lecture Theatre since February 2020.

Kristina gave fascinating insights into building a feminist start-up and changing the status quo of foreign policy. She discussed her work as a co-founder and co-CEO of the Centre for Feminist Foreign Policy – the world’s first research and advocacy organisation promoting an intersectionally feminist and people-centred approach to foreign policy.

She spoke about three main topics that the Centre for Feminist Foreign Policy is currently focused on: climate justice, defending human rights (especially women’s and LGBTQ+ rights), and disarmament.

Kristina is an award-winning human rights activist and former advisor to the German Federal Foreign Office. She is known for her feminist work for several years and has been interviewed by and portrayed in numerous international media outlets. She was named as Forbes' '30 under 30' (in both Europe and DACH), is a Handelsblatt/BCG “Vordenkerin 2020”, one of Focus magazine's “100 Women of the Year 2020", an Atlantik Brücke Young Leader, Ashoka Fellow as well as BMW Foundation Responsible Leader.

The talk was followed by a lively Q&A from the audience.