The College was delighted to welcome BAFTA and EMMY award-winning director and St Cross Fellow by Special Election Anthony Geffen on 1 July for the screening of the first episode in his 3-part series ‘History of the Emirates’ on YouTube.

The compelling first episode of the documentary "Taming the Desert" shows the untold story of the rich 125,000-year history of Dubai and Abu Dabi. The episode also reveals the ancient innovations that lie behind some of the most enduring and romantic images of the region – the camel caravanserai and the lush oasis. 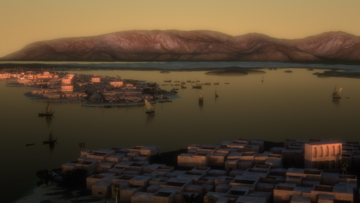 Archaeologists working in the region told their story of discovery, showing fascinating archaeological finds and results of exploration using Lidar scans of buildings and cities not seen for hundreds of years. This film brought these discoveries back to life in breath-taking CGI.

After the screening Professor Helena Hamerow, Professor of Early Medieval Archaeology and St Cross Fellow, and the Master of St Cross, Carole Souter chaired Q&A with Anthony where he spoke about working in the region and the challenges he faced. He also discussed the various technologies involved in making the film.

Anthony Geffen is one of the world’s leading documentary film makers and a pioneer in multiplatform story telling. He has won over 50 international awards including multiple British Academy awards (BAFTAs) and multiple Emmy Awards. Anthony worked for 10 years for the BBC before setting up Atlantic Productions in 1992, one of the worlds most respected high-end factual production companies, of which he is the Creative Director and CEO. He has become renowned for his work on multiple digital platforms, including his work in 3D, interactive apps and now immersive experiences. In 2017 he received the first BAFTA awarded for VR storytelling.