St Cross alumna Kristina Lunz (MSc Global Governance and Diplomacy, 2014) has published a new book exploring the future of feminist foreign policy. She shares her personal experiences as a human rights activist and feminist as well as her in-depth knowledge in the field of foreign policy to draw a new idea of policymaking that links peace, human rights, and justice.

Her book “Die Zukunft der Außenpolitik ist feministisch” (The future of foreign policy is feminist), published in German, suggests that a fair and safe world could be created if societies succeed in breaking through the patterns of male dominance established by power and oppression.

In her book, Kristina, who is a co-founder and co-CEO of the Centre for Feminist Foreign Policy, advocates for more utopias rather than Realpolitik and wants to question the status quo that has been in place for hundreds of years. 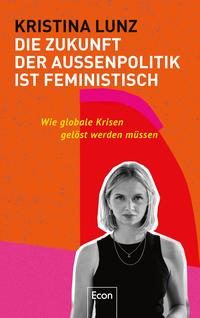 Moreover, she calls for a foreign policy that is grounded in mediation as part of peace negotiations, feminist power analyses, and climate justice.

Kristina is an award-winning human rights activist and former advisor to the German Federal Foreign Office. She is known for her feminist work for several years and has been interviewed by and portrayed in numerous international media outlets.

She was named as Forbes' '30 under 30' (in both Europe and DACH), is a Handelsblatt/BCG “Vordenkerin 2020”, one of Focus magazine's “100 Women of the Year 2020", an Atlantik Brücke Young Leader, Ashoka Fellow as well as BMW Foundation Responsible Leader.