The Move to St Giles

The Move to St Giles

In 1976, Michael Brookes (Fellow of the College and University Land Agent) first raised the idea of the College joining Pusey House on its site in St Giles. An agreement was reached whereby St Cross College would occupy substantial portions of the quadrangle.

The transition to St Giles took place during the term of the second Master, Dr. Godfrey H. Stafford, Master from 1980 to 1987. The official handover of part of the Pusey site to St Cross College took place on 2 July 1980. 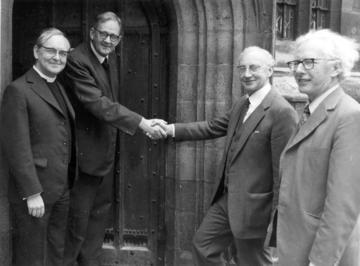 The actual move from St Cross Road to St Giles, however, did not take place until 1981. The buildings of Pusey House (the home of the ‘Oxford Movement'), though Gothic in style, were designed by the architect Temple Moore and begun in the summer of 1912. They were completed in 1926 under the direction of the architect John Coleridge.

Considerable interior renovation and alteration was required before the College could occupy its portion of the site. For example, the cloister along the southern side of the quadrangle was removed and a room constructed in its place to serve as the Hall (now the Saugman Common Room, named after Per Saugman, a former Director of Blackwell Scientific Publications and a former Fellow of the College). This conversion of the cloister required replacing a long load-bearing wall with steel beams, in itself a remarkable achievement given the confined space in which to work.

On 30 September 1983 the College was given an Oxford Preservation Trust Award for alterations to the south wing of Pusey House, to provide a College Hall and kitchen together with a new design for the main quadrangle. The architect for these renovations was Geoffrey Beard.

The quadrangles were then re-landscaped and the exterior of the buildings cleaned. On 7 June 1983, the first quadrangle was dedicated to our benefactor Richard Blackwell, who, along with Per Saugman, played a crucial part in securing for St. Cross the large Blackwell benefaction for the College.

Prior to the dedication of this quadrangle, the shields of four other Oxford colleges were carved over what is now called ‘The Four Colleges Archway', on the west side of the quadrangle. These four colleges gave important assistance in the founding and establishment of St Cross College in its early days before coming to St Giles, but specified that they were never to be named. In representing them by these shields (see below), we acknowledge their generous help.