The Foundation of the College

Foundation of the College

Following the Second World War, Oxford saw a marked increase in the number of subjects taught at the University, and in the number of graduate students. More people were required to teach these new specialities, most notably in the sciences, but also in fields such as archaeology and the social sciences - subjects that were not part of the traditional teaching programme for undergraduates. It was within this context that St Cross College was founded by the University and located at 10 St Cross Road. W. E. (Kits) van Heyningen was named the first Head of House, from 1 October 1965.

By the 1960s there was a clear need for new Colleges. Following the Second World War, Oxford (like Cambridge) saw a marked increase in the number and type of subjects taught at the University, and in the number of students who were reading for higher degrees. More people were required to teach these new specialities, most notably in the sciences, but also in fields such as archaeology and the social sciences - subjects that were not part of the traditional teaching programme of undergraduates.  As a result, there was a growing number of senior members of the University (i.e. members of Congregation with full-time research or teaching responsibilities) who had only titular connections with a College.  In order to be a member of Congregation one had to have been granted an M.A. degree, and that in turn required a titular association with a College, but these associations usually carried no Fellowship. As such, the holders had no dining rights, and, more importantly perhaps, were given little say in University administration or in such vital matters as the admission of students whom they subsequently had to teach. They were hardly ever appointed to University Committees, and there was also an anomaly in the distribution of Fellowships among subjects, as well as important issues of stipends and remuneration. By 1960 this growing inequality between Fellows and Non-Fellows had reached crisis proportions, as did the need to provide better academic homes for graduate students who often found themselves peripheral to the life of an undergraduate college.

In September and October of 1961, some informal conversations took place amongst a number of these non-Fellows (or ‘non-Dons’, as they soon came to be called informally), with most of the meetings held in the Geology Department. A public meeting of interested parties was convened on 15 November, and William Edward van Heyningen (known to friends as ‘Kits’) was invited to take the chair at this meeting, at which 48 people were present. As a consequence, a memorandum was presented on 14 December 1961 to the Vice-Chancellor (Sir Arthur Norrington, President of Trinity) concerning these issues. From 1961 to 1963 the Committee of Non-Fellows met frequently and prepared various memoranda and made representations to different committees. Importantly, on 30 May 1963, van Heyningen was elected a Member of Hebdomadal Council—the first non-Fellow to be so elected. On 8 June 1963, the Committee of Non-Fellows, at a meeting at Rhodes House, changed their name to the The Oxford Collegiate Society, with Tom Tinsley in the chair. 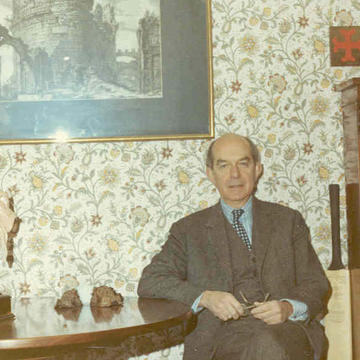 On 25 February 1964  a memorandum came from Hebdomadal Council, stating it had been agreed in principle that two new graduate societies (apart from Linacre House) would be necessary; that both would have not more than 70 Senior Members who would be called Fellows; they would be graduate societies for men and women; that for the early years they would be dependent financially on the University; that Fellows would have free dining rights, but not a stipend; that there would be a Principal as head of house, and that ‘to each new society will belong a certain number of postgraduate students’. Hebdomadal Council then appointed a committee to make proposals to carry out this policy. Things moved steadily forward from that point.