On St Cross Road, preparations had to be made before the College could open in October 1965. The old vicarage (10 St Cross Road) was demolished. The schoolhouse and attached lodge were refurbished to serve as the library and meeting room for the College, while a temporary, single-storey wooden ‘hut' was placed behind the schoolhouse to house the College's dining room/common room, kitchen and offices. By Michaelmas Term of 1966 the buildings were fully functional and the College could welcome its first graduate students (five in number). This mix of permanent and temporary accommodation was to be the College's home until 1981.

The Old School House (also known as Kirby Old School) with its large Gothic window required refurbishment before it could serve as the College library and a meeting room for the Governing Body. The attached caretaker's lodge, built in 1850, had tile-hung gables, extremely rare at that time. It was a pioneering effort by the Oxford sculptor Thomas Grimsley to construct a building without using timber. The tiles needed repair, however, and the distinguished painter, John Piper (who was made an Honorary Fellow in 1987) produced replica tiles to replace some of the missing ones. John Betjeman helped raise the required funds. Finally, a temporary prefabricated timber building, usually referred to as the ‘wooden hut', was constructed east of Old School House, for use as College offices, common room, hall, and kitchen. 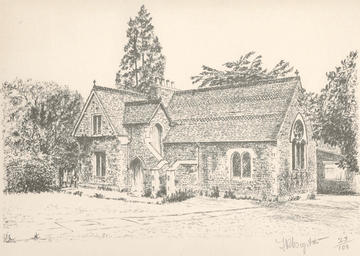 Lithograph of The Old School House by FR Wigston

The first Governing Body meeting was held on 5 October 1965 at Merton College, as the refurbishment of the Old School House was not yet complete. Forty-five were in attendance. The agenda included the immediate election of Tom Tinsley and Marshall MacDonald (Mac) Spencer, both of whom had been instrumental from the very earliest days, but who were not technically eligible to be Founding Fellows because the latter had to have been in post for five years. At the second Governing Body meeting (13 October), also held at Merton College, the title of Principal, assigned by the University administration to the Head of House, was changed to Master. Consideration was also given to what the name of the College should be. Options included naming the College after Robert Boyle, Christopher Wren, John Tyndall (FRS, d. 1893, physicist), John Wilkins (a 17th-century warden of Wadham and first secretary of the Royal Society), and Copernicus. In the event, it was decided simply to keep the name given by Hebdomadal Council to the new foundation, St Cross College.

A celebratory sherry party was held on 4 November 1965 at Halifax House (the Oxford University Graduate Centre occupying 6, 7 & 8 South Parks Road, now no longer standing). On that occasion Tom Tinsley, as Chairman of the Collegiate Society, presented a pair of silver candlesticks to each of the two new colleges (Iffley and St Cross). The pair given to this college is engraved "Presented to the Master and Fellows of St Cross College by the Oxford Collegiate Society, 1965". These gifts from the College's Founders are the first items presented to the College on its foundation and are therefore very significant artefacts in the history of the College.

Eventually the two buildings on the St Cross Road site were ready for use (the exact dates are uncertain). In Michaelmas Term of 1966 the first graduate students (five) arrived - thereby fulfilling the second aim of the Founding Fellows.

During the first decade and a half of the College's existence numerous efforts were undertaken to raise funds for the construction of permanent college buildings on the St Cross Road site. All came to nothing, however, and it was not until the year that Kits van Heyningen retired (1979) that substantial funds were obtained - and then it was not to be on the St Cross Road site, but rather on St Giles. Our move to the St Giles site would not have been possible without a benefaction from Richard Blackwell, with the assistance of Per Saugman of Blackwell Scientific Publications. At the Blackwell's Centenary Lunch, held at Merton College on 3 January 1979, Per Saugman presented, on behalf of Richard Blackwell, a substantial benefaction to Kits van Heyningen, representing the College.