St Cross Road, the original site of the College

St Cross Road, the Original Site of the College

Over the centuries, many changes had transformed the road that by the 1960s was called St Cross Road. On a map dating from 1577, it is an unnamed path, with a church, dating from the 11th century, and a manor house prominently marked on it. By 1874 the road was named Holywell Lane and the church, called Holy Cross Church, had a vicarage along with a schoolhouse attached to the cemetery lodge. By the mid-20th century the road had become St Cross Road. The school and lodge were to form half of the accommodation for the new College.

On the map published by Ralph Agas in 1577, no name is given for what is now St Cross Road, as it was just an unmarked, unnamed path. The area was countryside, outside the city walls. Holywell Lane (not Holywell Street, as it is known today) is indicated on it, as is The Long Walk (which is now known as Longwall Street). Holywell Church, dating from the 11th century, and the Manor House at the junction of modern Manor Road and St Cross Road, are shown prominently, and a major feature on the map (and of the parish, from about 1200) is Holywell Mill, one of the more important mills for supplying corn to the City. To the south-east of the church was a graveyard, and to the west of the unnamed path running alongside the church there were some barns and small cottages.

A hundred years later, the 1675 map of David Loggan shows the construction of houses along the north side of Holywell Lane and along the western side of the still unnamed path that was to become St Cross Road. By this time, there was a large village green, a bowling green, and two pits for cock-fighting, which had become a very fashionable sport by the mid-17th century.

After another century, The New Guide to Oxford (1759) reveals that Holywell Lane had now become Holywell Street and the road alongside the church had now been given the name Holywell Lane. Another late 18th-century map shows that the area was still quite rural, though by then there were two additional bowling greens and the Manor was serving as a workhouse.

A lithograph made in 1835 (see below) shows an ornate lychgate. The buildings on the west side of the road alongside the church are now more substantial, and the road itself (Holywell Lane, later to be St Cross Road) is now cobbled. 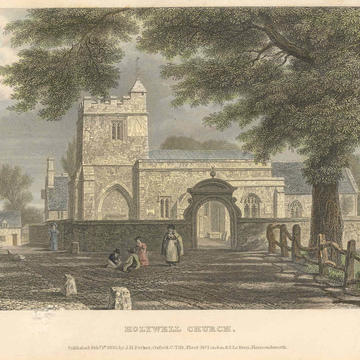 The street is still called Holywell Lane on an ordnance survey map of 1874, but the church is now Holy Cross Church, rather than Holywell Church. Most importantly for St Cross, there is now a vicarage along with two school buildings, one being an infants’ school. A cemetery had by then been created to serve the city, with an entrance alongside the church’s graveyard, and a second lychgate was constructed in 1848. This second lychgate became the north porch of an attached cemetery lodge, built in 1850. A school was designed by Charles Buckeridge in 1858 and later attached to this lodge.  The vicarage presumably dates from the same time.

This conformation of the area remained essentially unchanged from the mid-19th century into the mid-20th century, except that Holywell Lane became St Cross Road. The church had gradually come in common parlance to be called ‘St Cross Church’, although in fact its real name remained Holy Cross Church, and at some point shortly before 1898 (when the name first appears in Kelly’s Directory) this vernacular name for the church came to be applied to the road.