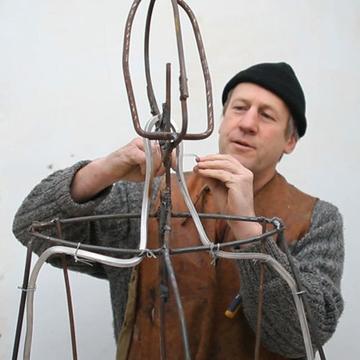 Tim Shaw was born in Belfast in 1964 and lives in Cornwall. He was elected to The Royal Academy in 2013 and made a Fellow of The Royal British Society of Sculptors and a Fellow of Falmouth University the same year.

Shaw has had a number of significant solo shows throughout the UK, Ireland and internationally. Most recently the major public solo exhibition Black Smoke Rising, which toured from Mac Birmingham to Aberystwyth Arts Centre. During 2014, Shaw’s work featured in Reflections of War at Flowers Gallery, London, and Back From the Front presents: Shock and Awe – Contemporary Artists at War and Peace at the Royal West of England Academy.

He has undertaken a number of public commissions including The Rites of Dionysus for The Eden Project, The Minotaur for The Royal Opera House and The Drummer for Lemon Quay, Truro. A more political side to his work became evident in a number of sculptures responding to the issues of terrorism and The Iraq War. Tank on Fire was awarded the selectors Threadneedle prize in 2008 and the installation Casting a Dark Democracy was reviewed in 2008 by Jackie Wullschlager of The Financial Times as ‘The most politically charged yet poetically resonant new work on show in London’.

Shaw has been supported by the Kappatos Athens Art Residency, The Kenneth Armitage Foundation, The British School of Athens,The Delfina Studio Trust through residencies in Greece, Spain and a fellowship in London. Most recently as an Artist Fellow at the Kate Hamburger Centre for Advance Study in the Humanities of “Law and Culture” In Bonn, Germany.

Mark Hudson writes, "Tim Shaw is one of the great storytellers of British art. No one takes on the contradictions of representation through making in a post-industrial age in quite the way he does.

Shaw ploughs a wilfully solitary, contradictory furrow. Schooled in heavy metal casting, part of a British tradition of monumental sculpture going back centuries, he attacks materials and subjects in a way that feels totally contemporary, creating environments which include sound, light and FX, drawing on rave culture. The tension between tradition and nowness, between solidity and nightmarish breakdown, is an organic part of this artist’s worldview, whether he’s looking at the atrocities of Abu Ghraib or the sense of primal ritual latent in the landscape surrounding his studio in the remote west of England.

Shaw’s work is often political in nature as well as being both mythical and metaphysical. Connecting these elements is a sense that the work relates to both ancient and modern humanity. He works across a range of different mediums and scales, creating single free-standing forms as well as large-scale multi-sensory installations."