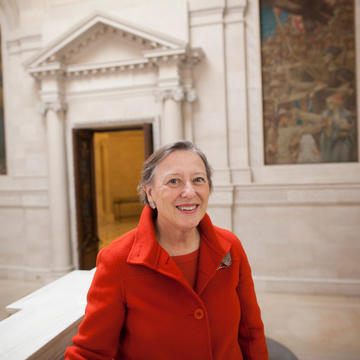 Before becoming Vice-President of Harvard Library in 2013, Dr Sarah Thomas was the first woman and the first non-British citizen in 400 years to hold the position of Bodley’s Librarian and director of the Bodleian Libraries at the University of Oxford. She also served as Pro-Vice-Chancellor and member of the Faculty of Modern Languages. Under her guidance, the Bodleian Libraries were awarded the Queen’s Anniversary Prize for their work to increase access to their collections.

Prior to her role at Oxford, she was the Carl A. Kroch University Librarian at Cornell for 11 years. She has also served as President of the Association of Research Libraries and helped lead the Program for Cooperative Cataloging at the Library of Congress, along with holding posts at the National Agricultural Library and the Research Libraries Group at Stanford University.

Thomas was awarded the Melvil Dewey Medal from the American Library Association and is a fellow of the American Academy of Arts and Sciences and the American Philosophical Society.

She began her library career at Harvard in 1970, filing cards into Widener’s official catalog.