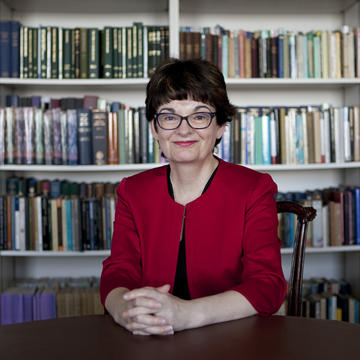 Dame Sally Mapstone is Principal and Vice-Chancellor of the University of St Andrews.

Before taking up the role of Principal of the University of St Andrews in 2016 her academic career was spent at the University of Oxford, where she read English Language and Literature, gained her doctorate on Older Scots literature, and became Professor of Older Scots Literature in the Faculty of English Language and Literature. She served as Junior Proctor (2006-7); Chair of the English Faculty Board, (2007-10); Pro-Vice-Chancellor for Personnel and Equality (2009-11), and Pro-Vice-Chancellor for Education (2011-6). Earlier in her career she worked as an editor in the book publishing industry. She is an Emeritus Fellow of St Hilda’s College, Oxford and an Honorary Fellow of Wadham College, Oxford and St Cross College, Oxford. She maintains a strong interest in issues of equality and access.

Professor Mapstone has a long-standing engagement in international issues. She is chair of the international advisory board for the University of Helsinki. In 2017 she received the Foreign Policy Association of America medal for services to higher education, and is an Honorary Fellow of the FPA.