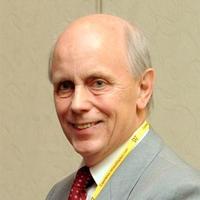 Following degrees in Physics at Cambridge, Peter Raynes joined the Royal Signals and Radar Establishment (now part of QinetiQ) at Malvern in 1971 where he started research into liquid crystals materials and devices. In 1992 Professor Raynes moved to the Sharp Laboratories of Europe Ltd at Oxford, where he was Director of Research until taking up the Chair of Optoelectronics in the Department of Engineering Science at Oxford in 1998. In 2010 he retired to York, where he is an Honorary Visiting Professor in the Department of Chemistry. He received an Honorary Doctorate in 2012 from the University of Hull.

Throughout his research career Peter Raynes has studied liquid crystal materials and displays. He collaborated with chemists at Hull University and BDH Chemicals Ltd (now part of Merck) to produce several highly successful ranges of liquid crystal materials which for many years dominated the world market and gained two Queen’s Awards for Technological Achievement. He also made many contributions to liquid crystal displays; some of his inventions are still in widespread use including one, known as the supertwist display, used in the first generation of mobile phones and laptop computers.

Professor Raynes has published over 140 papers and authored over 60 patents. In 1987 he was elected a Fellow of the Royal Society.