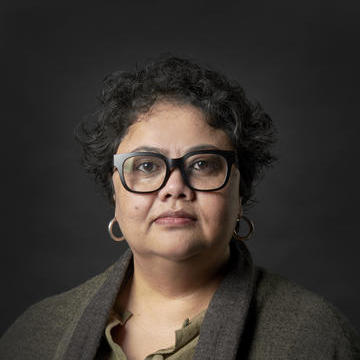 Associate Professor for the History of Art in India

Dr Mallica Kumbera Landrus is Keeper of the Eastern Art Department at the Ashmolean Museum where the collections include ceramics, textiles, sculpture, metalwork, paintings, prints and other decorative arts that span more than 5,000 years of cultural and artistic development in Asia. Her curatorial responsibilities are mainly in the area of Indian, Himalayan and Southeast Asian art. As Associate Professor for the History of Art in India her remit at Oxford includes teaching and research in Indian material and visual culture.

Dr Kumbera Landrus specialises in the history of art and architecture in India, particularly with regard to the intersection of art, architecture, religion, politics and socio-economics. She is especially interested in issues of cultural translation, focusing on works and built environments created for and by colonial powers, and by emerging cultures that were themselves hybrid, transnational and diasporic.

Dr Kumbera Landrus was Andrew W. Mellon Teaching Curator for the Ashmolean Museum’s University Engagement Programme (UEP) between 2012 and 2017. Before Oxford, she was a senior lecturer at the Rhode Island School of Design (RISD) while simultaneously holding teaching, research, curatorial and/or management posts at institutes such as Princeton University, Brown University and the Jaipur City Palace Museum. She was the first Director of Princeton’s Global Seminar Programme in India. In the late 1990s, she was a member of the Torre de Palma excavation in Portugal, one of the largest Roman villas in Iberia.

2014 Trans-cultural Temples: Identity and Practice in Goa, in In the Shadow of the Golden Age, ed. Julia Hegewald, EB Verlag, Berlin

2014 Sculptures from Kerala: Form and Performance, in Marg Publications, Mumbai

2003 Vijayanagara Art: A Political and Historical Metaphor, in Sagar 10 (University of Texas at Austin) 78–101.