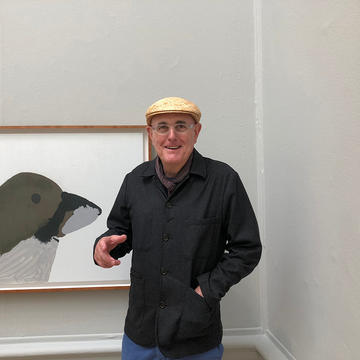 Humphrey Ocean studied at Canterbury College of Art from 1970 to 1973. During that time, he played bass with Kilburn and the Highroads, who supported The Who on their 1973 Christmas Tour. His first major solo exhibition in 1984 at the National Portrait Gallery, London was followed by shows at Tate Liverpool, Whitechapel Gallery, London and, in 2003, how’s my driving at Dulwich Picture Gallery, London. His series of new portraits, A handbook of modern life, was shown in 2013 at the National Portrait Gallery, and in 2018 he had an exhibition of sculpture and works on paper, I’ve No Idea Either, at Sims Reed Gallery, London.

Other projects include Big Mouth: The Amazon Speaks, his book with anthropologist Stephen Nugent about their visit to Northern Brazil; Today’s Nude with Artangel for Channel 4 in 2009; and Art Everywhere with the Art Fund in 2013 (which showed 57 of Britain’s favourite paintings on billboards). In 2015 he showed in The 50th Anniversary of the British Road Sign at the Design Museum, London. In 2016 he wrote and presented The Essay for BBC Radio 3 and received an honorary Doctorate from the University of Kent. In 2018 he has featured in Drawing Together at the Courtauld Gallery, From Life at Royal Academy of Arts and appeared on the BBC Radio 4 series Only Artists. He also hung Gallery 4 of the 2018 Royal Academy Summer Exhibition.

He is the Royal Academy’s Professor of Perspective.

Humphrey Ocean lives and works in London. He painted the portrait of the fifth Master of St Cross, Sir Mark Jones.