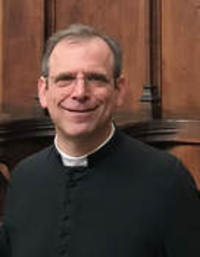 George Westhaver is the Principal of Pusey House, which was established at the end of the 19th century to promote theological study and to serve as an independent chaplaincy to the University from within the catholic tradition of the Church of England. George came to Pusey House and St Cross in August, 2013.  He conducted his doctoral research at the University of Durham under the supervision of Professor Andrew Louth on E. B. Pusey’s unpublished lectures, ‘Types and Prophecies of the Old Testament’. His research interests include E. B. Pusey and the Oxford Movement, the allegorical interpretation of the Bible, and the artistic expression of Christian doctrine.

George grew up near Halifax, Nova Scotia, on the East coast of Canada. He studied philosophy and anthropology at McGill University, Montreal, and International Development Studies at St Mary's University in Halifax. He prepared for ordination at Wycliffe College, one of the member colleges of the Toronto School of Theology. His last post was as the Rector of the Parish of St George, Halifax, in Nova Scotia. Prior to that, he was the Chaplain of Lincoln College, Oxford and the Assistant Minister at St Michael at the North Gate, Oxford.