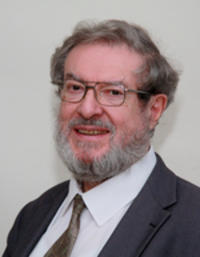 Professor George Smith, FRS, FIMMM, FInstP, FRSC, CEng, is a materials scientist with special interest in the study of the microstructure, composition and properties of engineering materials at the atomic level.  He led the Oxford research group that developed novel atom probe techniques for the direct observation of solid materials in three dimensions on the atomic scale.   For this work, he was awarded the Beilby Medal and Prize (1985), the Rosenhain Medal (1991) the Acta Materialia Gold Medal (2005), the Institute of Materials Platinum Medal (2006), and the Royal Society Armourers and Brasiers' Company Prize 2020.  He is author or co-author of 2 books and over 425 scientific papers. Together with Oxford colleagues, he founded a spin-out company, Oxford Nanoscience Ltd., which is now part of Cameca Instruments Inc.  From 1997 to 2005 he served on the Council of the U.K. Institute of Materials, Minerals and Mining.  From 2000 - 2005 he was Head of the Department of Materials at Oxford University.  From 2005 – 2009 he was a member of the Advisory Council of the British Library. He was a member of the MatUK Energy Materials Working Group, and led the writing of their 2007 report for the DTI on Nuclear Energy Materials. (Note that this set of 2007 Working Group reports also accurately predicted a forthcoming energy crisis around 2015).  He has published extensively on the subjects of phase transformations and phase stability in metals and alloys, and on the atomic scale structure and chemistry of catalyst surfaces.  He has particular interests in the long-term safety and stability of the engineering materials used in current-generation nuclear reactors, and those planned for use in future fusion energy production systems.  He officially retired from his academic post in Oxford in 2010, but continues to be active in research as an Emeritus Professor of Materials, and as an external consultant to an energy company.  He is also an Honorary Professor at the University of Science and Technology Beijing, an Advisory Professor at Chongqing University.  Within Oxford, he is an Honorary Fellow of Corpus Christi College and an Emeritus Fellow of both Trinity and St Cross Colleges. Since 2015 he has been on the board of Healthwatch Oxfordshire, the Goverment watchdog body for oversight of all health and social care provision in the county.  Between 2017-2019 he served as Chair of this body, and also represented it on the Oxfordshire Health and Wellbeing Board.