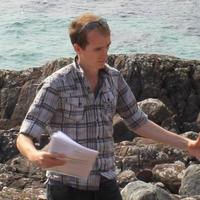 Fundamental questions about the formation and evolution of Earth can be addressed by studying tectonic processes at different spatial and temporal scales. In particular, metamorphism, magmatism, and deformation within the crust and upper mantle control the geodynamics of mountain building, the birth and death of ocean basins, and geochemical cycling of solids, liquids, and gases between the Earth’s surface and interior. These are the themes that I base my research projects around.

Areas of current research focus include the physico-chemical effects of fluid–rock and melt–rock interaction in different geological environments, the petrology of meteorites and other rocky bodies in our solar system, and how tectonic and metamorphic processes and products have changed on each though geological time. In particular, I have an interest in rocks of Archean age and frequently perform fieldwork in such regions.