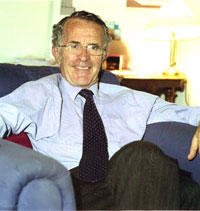 Professor Andrew Goudie was Professor of Geography and a Fellow of Hertford College from 1984 to 2003. A distinguished physical geographer, he was awarded the DSc by the University in 2002, a Royal Medal from the Royal Geographical Society in 1991 and the Prize of the Royal Belgian Academy for 2002. From September 2005 he is President of the International Association of Geomorphologists.

He has recently been President of the Geographical Association, President of Section E of the British Association, and Chairman of the British Geomorphological Research Group. He is a former Delegate of the Oxford University Press and a former Pro-Vice-Chancellor. Professor Goudie became Master of St Cross in October 2003, before retiring from the post in 2011. He was formerly Director of the University of Oxford's new China Centre, a position now held by St Cross Fellow Professor Rana Mitter.