On Friday 20 February, members of the Buildings Committee of St Cross College were given a tour of the West Quad building project. Site clearance work has been proceeding well since January and this was a chance for the supervising Committee to get behind the hoardings and take a look.

The contractors scrupulously applied health and safety rules to the visitors, as they do to themselves, so work boots, hard hats and hi-vis jackets were duly donned. There are now no signs of the old garages, bike shed or perimeter walls familiar to students and alumni. The walls have in fact been carefully dismantled, recorded and stored off-site. Some of the stone will come back to clad the outer edge of the new building. 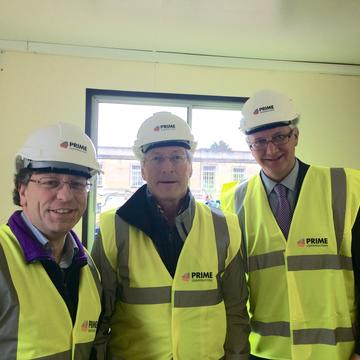 The work is now focused on removing the soil layer by layer under the scrutiny of archaeologists. Three wells have been uncovered, along with medieval boundary walls and a variety of building structures. Of note, some very old human remains have been found. Oxford Archaeology have found the burial of a young adult female that seems likely to date from the period of the English Civil War [mid-1640s]. The burial was found within what would have been a garden area where the historical mapping shows no structures or burial grounds at this time. The body was placed in a large shallow grave, in a burial shroud held in place with pins. A Charles I silver shilling struck at the Tower Mint in 1640-1 (the mintmark is a star), found with the body, had probably been placed on her eyes. We look forward to hearing more about this discovery as research progresses.

The move from the site clearance phase to the commencement of building work was marked by a groundbreaking ceremony on Friday 27 February at which Professor Sally Mapstone, Alumna (DPhil English, 1982) and Pro-Vice-Chancellor for Education, formally began the work of piling for the foundations. Also at the ceremony were representatives from the University, including Pro-Vice-Chancellor for Planning and Resources Professor William James and Director of Estates Paul Goffin. The ceremony was also attended by the Principal of Regent's Park College Dr Robert Ellis, members of the Student Representative Committee and College Fellows. 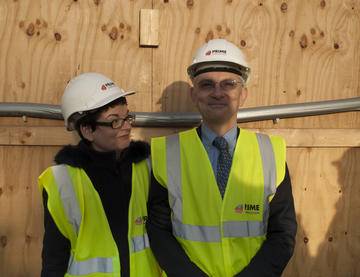 Professor Mapstone took time to thank those assembled, in particular, project manager Richard Todd and Prime Construction, and paid tribute to the Master's tireless efforts to bring the project to fruition. Professor Mapstone also fondly remembered her time at St Cross as a graduate student, before hammering in the first pile. 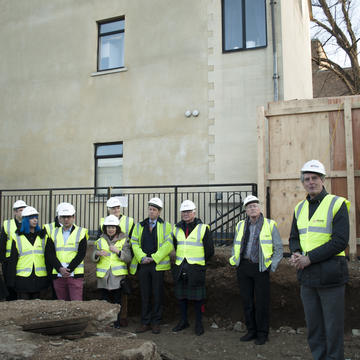 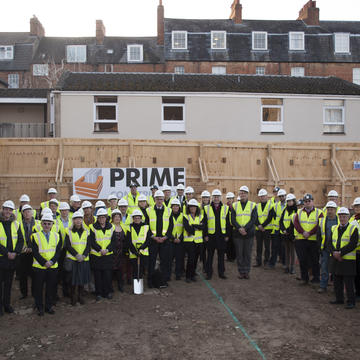