Hilary Term – nearly over? How did that happen? Life in and around College has been so full, I haven’t written a general blog for quite some time.  My apologies: next term I will try harder.

But now it’s spring and it’s hard to know where to start, as there is so much energy throughout the College.

In January the Library spaces were made available to students for study – the books will be moved across on 20th/21st of this month. 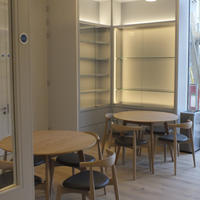 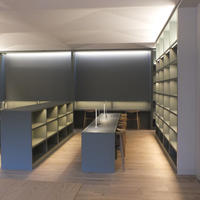 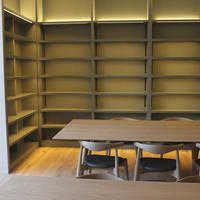 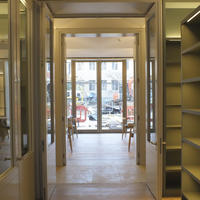 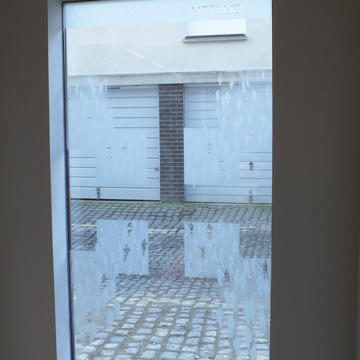 By the end of the month, the rest of the main ground floor internal spaces will be ready for use: the 80-seat lecture theatre, 2/3 seminar rooms (one of which can be divided into two smaller spaces), and the welcome foyer. The cycle store will take a little longer – but the Bursar is sure it will be worth the wait!  The hard landscaping in the main quad is now more or less complete, including the final pathway, and the parks department has begun to work its magic: rich new topsoil is going in and our first new tree has been planted – a mulberry. 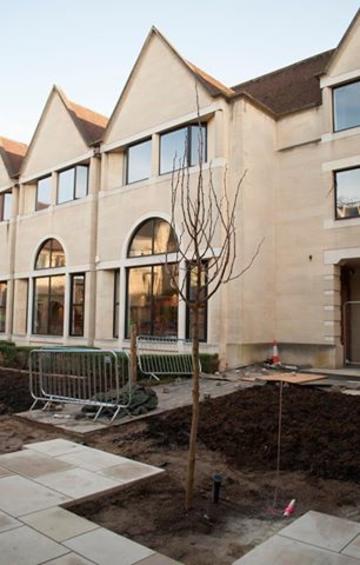 Once this work is finished we will think about some seating for the paved areas, so that everyone can take advantage of the glorious British summer that is to come.

And, of course, just squeaking in to February by the skin of our teeth, the rainbow flag was flown from the new flagpole – looking fantastic as a pair with that in Regent’s Park across the other side of Pusey Lane. 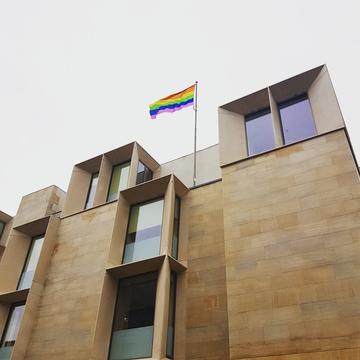 After the news of the loss of Founding Fellow, Fred Hodcroft, whose funeral I described in my last blog, we were also saddened by the death of Simon Porter, who was the Bursar from 1977 to 1987, and a huge presence in the cricketing life of Oxfordshire. As the history of the College grows, it is inevitable that we will lose more of those who played key roles in its development, at the same time as we welcome those who will help write its future history.

Our Director of Development, Sue Berrington, left us in mid-February for a new life in Scotland, having helped us raise the funding for the West Quad building, and Development Assistant Miłosz Kłosowski has moved on to greater things at the Saïd Business School. We wish both of them well.

The College’s sporting stars have been working hard on land and water in recent weeks. The women’s Football team – the Foxes – made it to the final of Cuppers, and the various eights had a storming week on the river (and, indeed, a week of storms) alongside their Wolfson colleagues. Fate was not always kind, and equipment failure played its part, but the signs are good for the rest of the year.

On Wednesday next week we will leave from College for the formal procession to the Sheldonian to mark Dr Dan Hicks’ installation as a University Proctor – we are both brushing up our Latin and Lesley Sanderson in my office is now expert on the rules of academic dress.

Victoria Cox is leading for us on development and alumni matters and she and I had a fantastic trip to America at the end of January. San Francisco, Houston and New York in 5 days was a bit of a whirlwind tour, but a great way to meet friends and alumni. The De Young museum in San Francisco proved an excellent location for a reunion and the fact that our guide was the mother of an alumna was a particular pleasure. We had not expected to be lunching outside, nor to catch the sun, in January – and, indeed, when we got to New York, we met with snow! 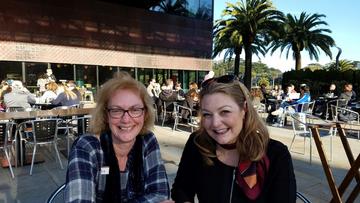 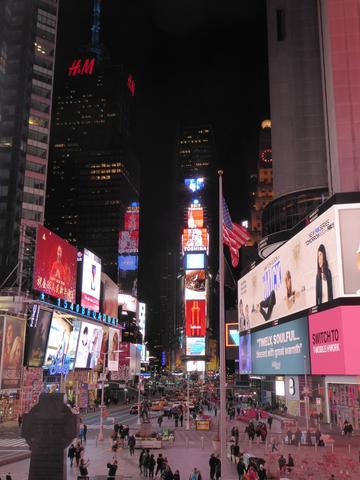 In a couple of weeks’ time I will be heading to Singapore, to meet alumni as part of the University’s weekend – I look forward to making more new friends then.

The first graduation of the year saw 30 students enjoy a special day with their family and friends – the Hall was full for lunch before the ceremony and the rain held off - just - for the photographers to capture the moment in the front quad. One of those graduating had been with the group in San Francisco, so it was really nice to see her again and meet her parents.

As usual, we have had a series of fascinating St Cross talks this term: Prof Danny Dorling on equality in Europe, alumnus Michael Levenstein on the doctrine of necessity, Prof Andrew Pollard on the role Oxford has played in tackling typhoid, Prof Mathias Basedau from Hamburg and Trevor Pomeroy on aspects of violence and religion (these last two talks organised by one of our students, Silvia Spodaru).

I have been delighted to be joined by a range of guests for Hall and Special Dinners – including Emily and Lucien Taylor, Oxford-based experts in Internet governance and information technology; Pam Alexander, Chair of the Covent Garden Market Authority; the educational psychologist Dr Roger Booker; Dame Liz Forgan, former Chair of the Arts Council; and Rex Cowan, marine salvage expert. This week’s guests included Bob McNulty from Partners for Livable Communities; Robin Mansell, Professor of New Media and the Internet at the London School of Economics; and Professor Edward Steinmuller from the Science Policy Research Unit at the University of Sussex.

It was a special pleasure that alumna and President of Wolfson College, Dame Hermione Lee, and her husband, Professor John Barnard, joined us for the Hilary Feast. In fact the special relationship between Wolfson and St Cross has been much in evidence. Suzy Hodge and I enjoyed a tour of Wolfson’s art – including some spectacular loan pieces by Anselm Kiefer and Marc Quinn – and (see above) the boat club did great things during Torpids last week.