Week 5 already: the pace of meetings is picking up – and the Hall is still wonderfully crowded at lunch time.

We have had our first Special Dinners of the term, which are extremely popular and quickly fill up when booking opens online at the beginning of term. Top tip: it’s well worth joining the waiting list, as places often become available closer to the time.

My guest for the Special Dinner on Friday, 3 November was Helen King, Principal of St Anne’s College, who was previously Assistant Commissioner of the Metropolitan Police. My guest on Wednesday, 8 November was Professor Sir Richard Brook, Emeritus Professor at the Department of Materials and former Director of the Leverhulme Trust.

We also held three Introductory Dinners at which students new to the College met their College advisors. So new students should have had the opportunity to experience a full St Cross evening meal in the first half of Michaelmas term. I hope that these will be the first of many such evenings for new students.

David and I are continuing to host drinks evenings for doctoral students during November at home in Wellington Square. This week’s was the first with both the dog and the cat in residence – although the cat was under a bed upstairs!

We held a lovely event in College to mark Founding Fellow Ruth van Heyningen’s 100th birthday, with drinks in the Lange Reading Room followed by a family lunch in – appropriately enough – the van Heyningen room. 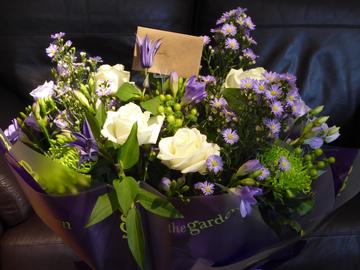 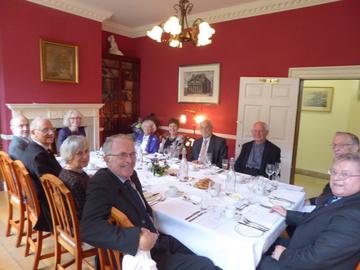 We will soon have the piece by her friend, the important British artist John Piper, which we bought to commemorate the moment, on display in the West Wing. 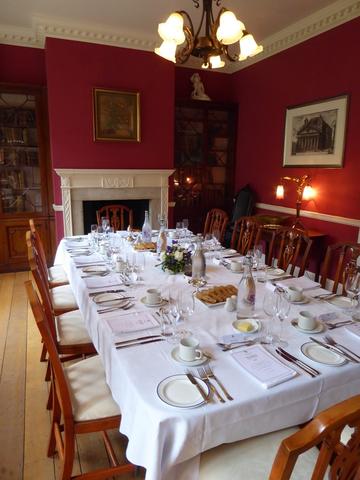 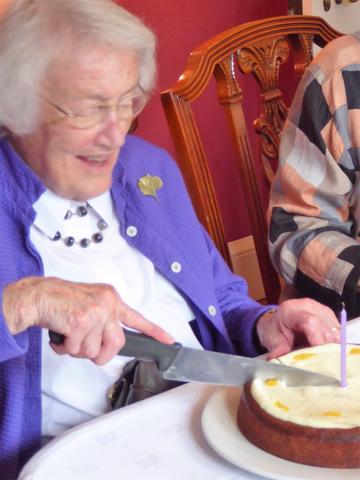 On Saturday 28 October we held a very successful alumni event attended by more than 50 alumni, students, fellows and staff. Current students Melissa Skorka and Jieun Baek gave fantastic presentations on their work on Afghanistan and North Korea respectively and we were able to show returning alumni the West Wing rooms before they attended what has become known as ‘Fred’s Lunch’ in honour of another Founding Fellow, Fred Hodcroft, who died earlier this year. 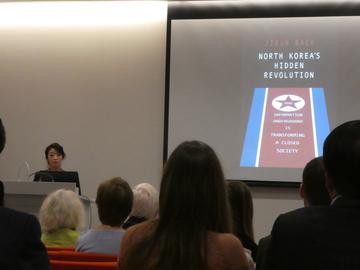 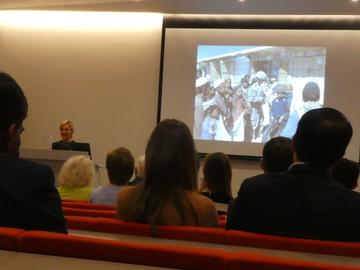 The format worked really well and is one I am sure we will repeat. 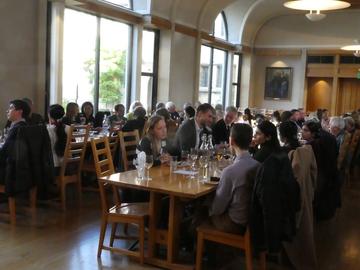 The College catering team has been wonderful throughout and given us everything from luscious cookies with tea to elegant lunches and dinners.

Not all College events include eating, although the opportunity is often there. Our friends at Pusey House invited St Cross students to an evensong service and also to tea, cake and a book-sale. Whilst tea and cake drew larger numbers, the choir in the chapel was, as ever, on top of its game.

St Cross talks are now held in the West Wing and are a good opportunity to hear about the important work being done by Fellows, alumni, students and guest speakers. Ed Macalister-Smith, former Chief Executive of the Nuffield Orthopaedic Centre, gave us a great talk on Tuesday 24th October, about the National Health Service and responded honestly and robustly to some very detailed and perceptive questions. 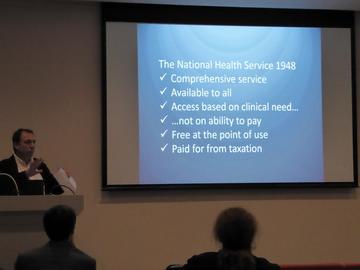 On Tuesday, 7 November, Linden Vongsathorn, alumna (MSc Sociology, 2010), talked on "The digital video revolution: Its human and social impact". Linden summarised the way in which priorities are determined in the industry and the continuing challenge of ensuring gender diversity. The irony of an early computer advertisement - which showed a stereotype of a ‘housewife’ in her kitchen, whilst suggesting that she could easily learn to programme her computer to help – was not lost on the audience, as one of today’s key challenges is a prejudice in some quarters that ‘women don’t do tech’: something that Linden herself challenged very effectively.

One of the most exciting events of the past few weeks for me was the first in the series of Global Thinkers of the International, a reading and discussion group convened jointly by student and alumna Sharinee Jagtiani and Marina Pérez de Arcos. The first session, looking at Andrés Bello, was led by the Head of the Department of Politics and International Relations, Louise Fawcett. This is a great innovation to expand the reading of students to include thinkers not traditionally on the Oxford syllabus, and a perfect example of the internationalism and interdisciplinary approach of the College.

The first formal meeting of the Law Society this term took place on Friday, 3 November in the Large Seminar Room. A respectable number of St Cross lawyers – and those interested in the law – were there and it is clear that a new Committee, with Mike Heimos as Acting Chair, will take the Society forward into its second year. Anyone who could not make that date and time but is interested in being involved will, I’m sure, be welcome to join in.

Degree Day celebrations on 4 and 11 November brought students and their guests back to College for the traditional walk to and from the Sheldonian graduation, and a shared meal to mark the moment. In future years I hope to be attending similar celebrations for some of the prospective students who were shown around the College, and wowed with tea and cake, at our Open Day on 8 November.

I have now started to meet all our first year students in groups – this will occupy much of the next month – at which point Victoria Cox and I will be heading to New York and Washington for Giving Tuesday alumni events – more on this next time.

On Tuesday, 14 November, Mike Mesterton-Gibbons, DPhil Mathematics, 1974, will give a St Cross talk on ‘ The Desk-Bound Naturalist: An Unlikely Career as a Game Theorist’. Who could resist that set-up? You can book a place here.

On 18 November this year’s first History and Philosophy of Physics Conference will take place in the Martin Wood Lecture Theatre at the Department of Physics on the subject of Astronomy across the Medieval World. My first experience of HAPP conferences was the History of the Moon last year and I am really looking forward to this one:  https://www.stx.ox.ac.uk/happ/events/astronomy-across-medieval-world-one-day-conference.

On 21 November Massimiliano Demata’s St Cross talk will be on Social media and the New Language of Politics (booking here).

Are you interested in Japanese culture? Then this may be for you. With few young Japanese people choosing to wear the kimono, and fewer still choosing the buy one of these expensive traditional garments, the shops and craftspeople who sell and make the kimono are facing troubled times. Third generation kimono shop owner Yoshihide Shibakawa is coming to St Cross College on Thursday 23rd November, to deliver a special talk on his vision of the future of the kimono and what it means to be a retailer in the traditional industries in 21st century Japan. There will also be a chance to try on real Japanese kimonos in the second half of the event.

This talk is organised by final year DPhil student Julie Valk, whose doctoral research focuses on the kimono retail industry. Please note: Julie will interpret for Mr Shibakawa and the event will be filmed for use on the speaker’s shop website.

Please don’t forget to book for these events, so that we can manage numbers.

We have had meetings of the Development and Alumni Relations, Academic, Fellowships and Executive Committees and of the Governing Body (GB): I didn’t quite manage to get a photograph of all Fellows and attendees at the latter, but the rest will be snapped at future meetings. It was our Archivist, Emilie Savage Smith, who suggested we do this as a way of creating a record of current GB members, and it’s a great idea.

We welcomed our 5 new Postdoctoral Associates from the Humanities and have been delighted to see that Yvonne Liao, Maarten Noorduin, Eskandar Sadeghi Boroujerdi, Joulia Smortchkova and Michael Zellmann-Rohrer are often around the College already.

Congratulations to our Fellow, Professor Kevin Marsh, on the award of a 2017 Drexel Prize in Infectious Disease – a further acknowledgement for his work.

Lunch–table conversation – such a big part of St Cross life – suggests that Professor Diarmaid McCulloch’s latest book is in the final stages of development. Having heard Diarmaid talk for 45 minutes without a single note at the Ashmolean recently (on an unrelated topic, and delighting his audience) I was reminded yet again how incredibly honoured we are to have such a variety of Fellows of such standing sharing our College life.

On a rather different note, as many of you will know, one of our wonderful porters, Tony Mead, retired on 10 November. More on Tony next time, but sufficient for now to say that further plans are afoot to mark the occasion! 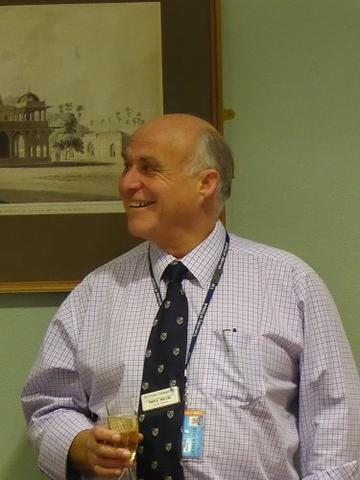 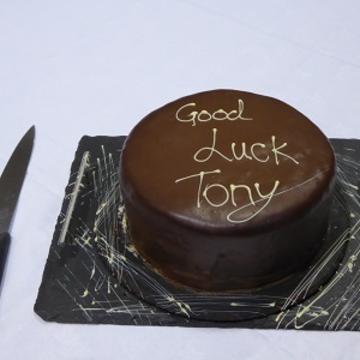 University and other Colleges

As well as attending my first meeting of the University’s Equality and Diversity Panel, wider events in the past couple of weeks have included the opening by the Vice-Chancellor of St Anne’s splendid new Library and Academic Centre and the unveiling of Benjamin Sullivan’s portrait of the retiring Warden of St Antony’s, Margaret MacMillan. 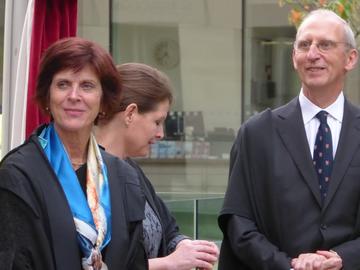 And it was good to be able to attend the launch of the Ifstal (Innovative Food Systems Teaching and Learning – www.ifstal.ac.uk) programme for the term, convened by Education Coordinator and St Cross alumna Saher Hasnain, as well as meeting up with members of the OxWic group for which I am senior sponsor: https://www.facebook.com/OxWomenConsulting/.

Keeping up the range of cultural events in Oxford will prove more challenging as term goes on. The Oxford Greek play at the Playhouse – Euripides’ Bacchae – demonstrated the extraordinary professionalism and creativity of the best student productions. For music we paid our first visit to the North Wall Arts Centre in Summertown ( https://www.thenorthwall.com ) – Fara, an Orcadian female folk band, coinciding with a great exhibition by the Society of Wood Engravers in the exhibition space  – and the last night of the Lieder Festival at SJE Arts Centre on the Iffley Road (https://www.sje-oxford.org ). Jazz at St Giles added further variety: http://www.st-giles-church.org/stgiles/events/ . All these venues well worth knowing. There was also a special concert in the Sheldoniain to celebrate the Oxford Philharmonic Orchestra.

And for sheer entertainment – Jools Holland and Alison Moyet at the New Theatre.

And then, of course, there was Oxford Ceramics Fair, with some of the best contemporary potters selling, discussing and demonstrating their craft: 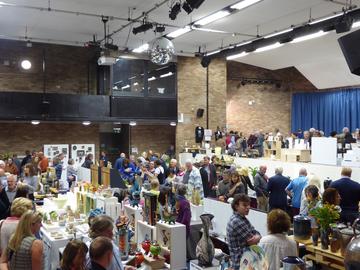 If you have a moment to see the small exhibition curated by our Fellow Mallica Kumbera Landrus in Gallery 29 at the Ashmolean – OLD TRADITIONS, NEW VISIONS: ART IN INDIA AND PAKISTAN AFTER 1947 – do have a look. You will find unexpected by works by artists you probably do not already know.

And, yes, I admit that I have checked out the new Westgate shopping centre: the views from the roof garden on a clear afternoon were quite something. 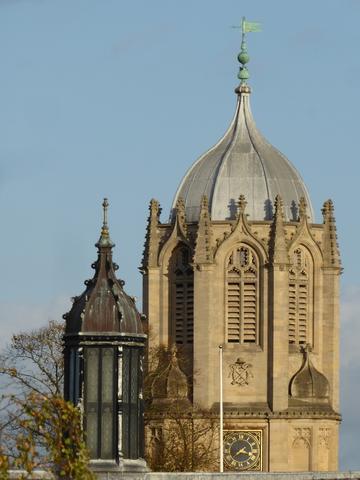 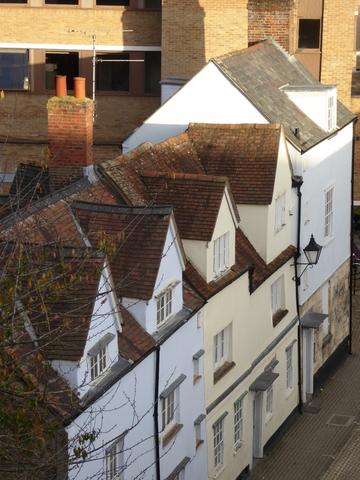 I was delighted to speak at the day of Oxford visits which brought to an end Historic Royal Palaces’ international conference on relevance in heritage, in the glorious and historic surroundings of University College’s dining hall.

Do you know where in Oxford you would find this? 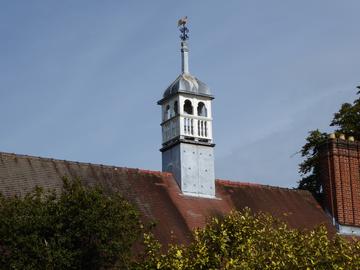