Although the break saw rather a lot of rain – not just in the UK – I hope everyone had a chance to recharge their batteries. We now seem to have swept straight past spring and into summer – juggling has been spotted in the front quad!

So what has been happening?

On 5 April I flew to San Francisco for the University’s North American Alumni Weekend. Clearly keen to ensure we felt at home, the weather for the first 36 hours was truly miserable, but that didn’t prevent us from catching up with friends we had met before and making new ones. On Friday evening, after drinks on the 32nd floor of the conference venue, we were bussed through the rivers of rain to the main conference dinner, which was held on the upper floor of the Ferry Building. At long shared tables we were able to talk to alumni from other colleges as well as our own, and the evening finished with a performance by the Queen’s College choir. 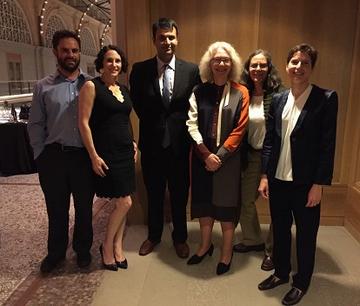 Saturday saw some great conversations and lectures as part of the academic programme: the Chancellor of the University, Lord Patten, in conversation with Sir Michael Moritz; Reid Hoffman in conversation with Eric Garcetti, the Mayor of Los Angeles; Professor Phil Howard on Truth and Trust in the Era of Social Media; Richard Ovenden and Professor Andy Orchard on Tolkein and so on. There were also some very pertinent questions from the floor about the lack of diversity amongst the speakers which I know went home very powerfully and will be acted upon for the future. 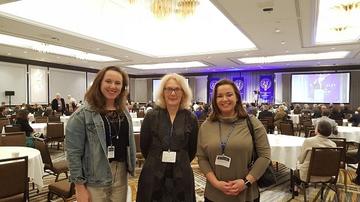 By now the weather had changed and on Sunday the sun shone on our informal brunch, at which we were joined by two Oxford-based members of College, in San Francisco for an academic conference. The venue for the brunch had been suggested by alumna Keely Stevenson, who sadly couldn’t be with us – because she was in Oxford! Great to be able to meet up with her when I got back. 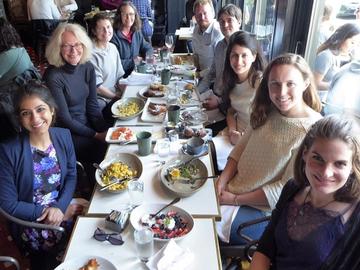 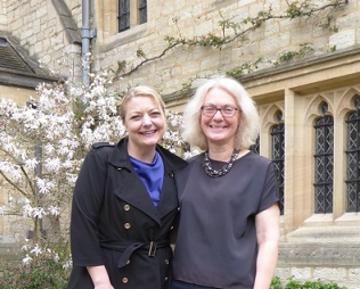 In my last blog I should have included the Fellows’ lecture and dinner at our sister College, Clare Hall in Cambridge. There have been student dining exchanges for a number of years, but this was the first Fellows’ event, organised by our Senior Tutor, Jo Ashbourn. Plans are already afoot for next year’s return match.

This week the new cohort of CRISP scholars from India and Sri Lanka arrived to spend Trinity with us. Much of their time will be in College, with their programme overseen by Fellow Richard Briant and supported by our relatively new member of staff Rasangi Prematilaka.

On Saturday 21 April we welcome the members of the Audrey Blackman Society, our legacy supporters, to St Cross for their annual lunch and will then enjoy a concert by the Bate Players at New College in honour of the memory of Hélène La Rue, a late Fellow of the College. We have a scholarship in her name.

And then on Tuesday 24 April Diarmaid MacCulloch will give the first in his series of Hensley Henson lectures at the Examination Schools on aspects of Thomas Cromwell. You may have heard Diarmaid on The Long View on Radio 4 recently, comparing the Facebook Cambridge Analytica data row with Luther's rejection of Purgatory and a loss of trust in the Church in pre-Reformation Europe - not the most obvious pairing at first glance!

Also on Radio 4 at the moment – Rana Mitter’s 20 part series on Chinese Characters: you can catch it on the BBC iPlayer if you miss it on the day.

On 26 April I am delighted to be able to represent St Cross with colleagues at the Memorial service for our late Fellow Colin Dexter, author of the Inspector Morse novels and, during his time with us, a very committed member of College.

On 10 May the Special Ethics Seminar will be on The Future of Mobility: How and why will we transport ourselves in the next decades – I met alumni working on aspects of this subject when I was in San Francisco: from the technology of autonomous vehicles to HR issues in the gig economy, so I’m particularly looking forward to this lecture.

The next AfOx insaka will be on 11 May when the topics are discovering seeds of Colonial Resistance in WWI and exploring sub-Saharan Africa's clinical research preparedness for outbreaks. If you haven’t yet discovered this great way of learning more about Africa-focussed research do come along.

Trinity term always has a series of special events, not least the Sports Dinner, the Going Down Dinner and the full-on, all day celebration of Encaenia.

I am delighted that fellow Heads of House Elish Angiolini (St Hugh’s, Hall: 1 May); Steven Cowley (Corpus Christi: Dinner: 4 May) and Hilary Boulding (Trinity: Feast: 15 June) will be enjoying our St Cross hospitality with their partners this term, as will the retiring and very longstanding Leader of Oxford City Council Bob Price and his partner on 18 May. As ever, do come and speak to our guests if you are around before and after these meals – they will all enjoy meeting as many St Cross folk as possible.

The Oxford Philharmonic Orchestra had a wonderful programme of Brahms on 4 April with Anne-Sophie Mutter and Pablo Ferrández. The next day Anne-Sophie Mutter held a Master Class at which one of the three young artists being coached was none other than St Cross student, Shun Hioki. Anne-Sophie was obviously amazed to find that Shun plans to become a lawyer rather than a professional musician and made clear that she thought he could have a very successful musical career. Yet another example of the extraordinary range of talent brought together in the College.

As Chair of the Oxford Preservation Trust’s Planning Committee I am learning a lot about proposals for development around the city and trying to get a better understanding of their likely impact by walking around possible sites. Given the number of plans in the pipeline, this will keep me supplied with weekend walks for some time to come!

It was a great pleasure to meet up with others who are keen to spread the word about Compton Verney (http://www.comptonverney.org.uk/ ) as guests of Philip Mould at his gallery this week. Sir Roy Strong is just as amazing in person as one might expect!

I was also at the Tower of London for an Historic Royal Palaces Audit Committee meeting this week. Walking back to the tube, I overheard a small girl, catching sight of Tower Bridge for the first time, ask her mother: ‘Oh! What’s that? Is it Disney?’. A question that will stay with me for some time.

And if any of you find yourself in Cambridge (perhaps visiting our sister college!) I would recommend Kettle’s Yard and the Fitzwilliam Museum. Very different from one another but each with a wonderful collection. I did have a moment of disbelief, though, when I realised that I had seen two wonderful John Akomfrah installations on either side of the Atlantic in the space of 10 days. It’s a very long way from a small village in Cornwall.

And finally, our elderly ginger cat is extremely pleased to feel the sun on his back…. 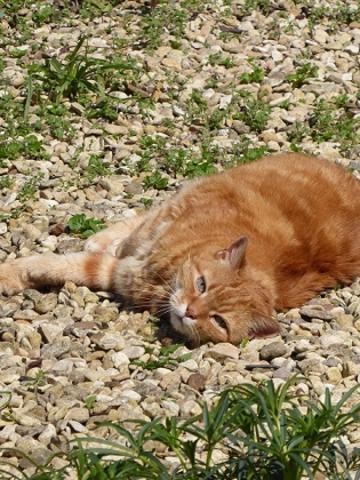