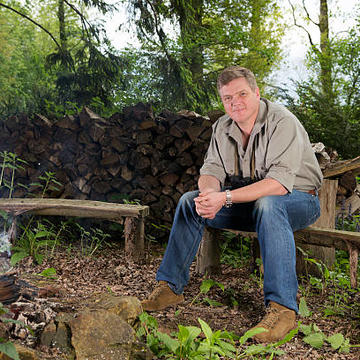 On Friday 27 November, the College was delighted to welcome one of the world's leading bushcraft masters and well-known TV presenter, Ray Mears, who gave a broad-ranging talk on the theme of exploration and the next frontier at a virtual lunch organised for Social Sciences students and fellows by Dr Jo Ashbourn. Ray drew on his vast personal knowledge of bushcraft and survival techniques along with extensive primary and secondary historical research that he has undertaken to recount a fascinating journey throughout the centuries of both positive and negative consequences arising from humans' wanderlust.

His talk began with the Roman Empire's conquest of Britain and then turned to the first two and a half centuries of European seaborne exploration and empire. These were marked by both the seizure of local resources and intriguingly by a greater willingness on the part of many European explorers of the time to adopt aspects of indigenous culture and knowledge about the local environment in which they travelled.
These contrasting sides to early imperialism led Ray to question why many such expeditions should have necessarily resulted in the taking by force of things which could otherwise have been obtained through negotiation. Ray drew parallels not only with indigenous communities of the past and the continuing impact of the colonial experience today but also with early modern European explorers who simultaneously embraced local bushcraft culture but also enabled the exploitation of the very people who shared those skills with them.

Ray went on to note that by the nineteenth century the early modern philosophy of exploration as a vocation had been replaced by a professionalism forged in military and naval training, aided by improvements in ship-building and navigational technologies. This new approach to exploration was highlighted through the example of Robert Falcon Scott's ill-fated expedition to the South Pole.
As Ray speculated, should Scott's team have had better skiing abilities and had not been demoralised by the news that they had been beaten to the South Pole by Roald Amundsen, they might have covered a further distance each day across the ice of a mere 350 metres to reach their base camp in time before their equipment failed and supplies ran out with the consequent deaths of the entire team.

Ray offered that whilst exploration has been very important to the development of humans as a species, it has also shown a darker side of our nature as a species and that past mistakes should now be reconsidered through a contemporary lens. Ray went on to suggest that the exploration of the future will be scientifically-driven and that an ethical assessment of its impact will be critical. One frontier ahead of us will be the further exploration of the deep ocean with Ray noting that humans have spent less time descending into the deep ocean than they have spent walking on the Moon. Another frontier will be in space if humans leave Earth to establish an outpost on another planet to avoid future catastrophes such as a meteorite collision with Earth. Humans have yet to develop the technologies to fulfill this challenge successfully and will need to devise ethical protocols on how they would treat any other lifeforms encountered elsewhere in space.

Ray ended by noting that in the meantime we all need to be much better custodians of our "spaceship" Earth and quoted T.S Eliot's stirring lines:

We shall not cease from exploration
And the end of all our exploring
Will be to arrive where we started
And know the place for the first time.

Following Ray's talk, there was a lively Q&A session with questions ranging from the human impact of commercial space tourism to continuing debates over how to approach and come to terms with society's colonial past.

Ray has just completed his latest book “Wilderness Chef: The Ultimate Guide to Cooking Outdoors”, which is being published this year.