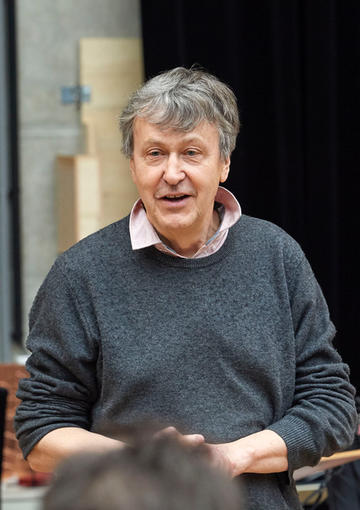 On Thursday 20th August, the College was delighted to welcome Adrian Noble, the well-known theatre director and previously the Artistic Director and Chief Executive of the Royal Shakespeare Company, to its first ever virtual lunch for both current and incoming Humanities students, organised by Dr Jo Ashbourn.

Adrian gave a wide-ranging and thought-provoking talk on the theme of Shakespeare for the modern age. His talk began with a description of the earliest architectural environment for plays in Ancient Greece before moving across the centuries from Shakespeare's own time through to the Victorian age when
actors would adapt dialogue and endings to suit their storytelling preferences.

This historical survey ended with a discussion of how stagings of a growing number of Shakespearean plays have been reinvented during the 20th and 21st centuries to fit the contemporary themes and contexts of those times. Perhaps most intriguing was Adrian's insight that the popularisation of scientific insights from the theories of Darwin and Freud helped to revolutionise how more modern audiences framed and began to relate to Shakespeare's works with the inner life of man no longer being hidden but becoming a subject to be explored.

Adrian examined the changing historical significance ascribed to several plays over time, including "Macbeth", going on to draw an analogy between the tyranny displayed in that play and that embodied by the Third Reich. With a nod to recent global events he described how his own production of Verdi's opera "Macbeth" at the Metropolitan Opera in New York had been staged with scenes of refugees fleeing the country from Macbeth's oppression. Similarly, his production of Henry V during the 1980s, starring Kenneth Branagh in the title role, channelled a critique of Thatcherism, echoing national sentiment at that time following the Falklands War.

Adrian ended by discussing Shakespeare as a humanist whose artistic roots were embedded in the Renaissance and describing how the dramatic tradition has been passed down through the generations as a baton from each era's distinguished Shakespearean actors on to the next.

Adrian is currently writing a book on Shakespeare for directors, positing that Greek drama is essentially about man's struggle with nature whilst in Shakespeare the context is shifted to man's
struggle with man.

There was a lively Q&A session after the talk and despite the lack of sandwiches at a virtual lunch, everyone had plenty of food for the mind.