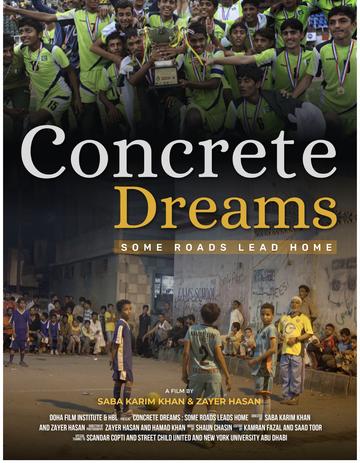 St Cross alumna Saba Karim Khan has directed an award-winning documentary on Pakistani footballers Mohammad Salman and Owais Ali. Concrete Dreams: Some Roads Lead Home follows the story of the young men living on the streets of Karachi who, in spite of sexual violence, gang recruitment and substance abuse, went on to win the Bronze Medal for Pakistan in the Street Child World Cup in Rio. The film—Khan's first, co-directed with Zayer Hassan—is supported by a grant by the Doha Film Institute and has already won several awards in the festival circuit.

'In Pakistan, the terror-and-panic rumour mill keeps us in its clutches by constantly peddling seething, doomsday narratives', says Khan, who is also an instructor of social science at NYU Abu Dhabi says. 'Happy news barely makes it to our screens. I wanted Concrete Dreams to bridle against that failed, victim poster-child narrative of Pakistan, and use a rose-colored lens to tell an equally authentic story.' A full release of Concrete Dreams will happen later this year once its festival run is over.

More news from our alumni