St Cross Students in the 2015 Oxford and Cambridge Boat Races

St Cross Students in the 2015 Oxford and Cambridge Boat Races

Congratulations to St Cross students James Cook and Shelley Pearson who have been selected to row for Oxford in this year's Oxford and Cambridge Boat Races.

For the first time in the Boat Race's prestigious history, the women's race will take place on the same day and over the same distance as the men's. Oxford's men and women are looking to continue their winning streak, with both boats beating their Cambridge counterparts two years running.

The race is the most famous of the Varsity Matches and has a huge audience on television, radio and online, with an average of 100 million tuning in to watch the race worldwide each year.

Further details on the crews and the history of the Boat Races can be found on the official website. 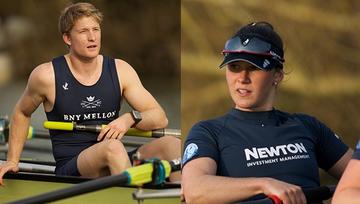 James and Shelley during training