Martyna Syposz, St Cross DPhil candidate in Animal Behaviour at the Oxford Department of Zoology, has completed a five-week expedition to clean over 25 tonnes of accumulated plastic waste from the Aldabra Atoll in the Seychelles.

Martyna is part of the international Aldabra Clean-Up Project team, a collaboration between students at the University of Oxford and the Seychelles Islands Foundation. It aims to remove and sustainably manage accumulated ocean waste from the Aldabra Atoll and to increase awareness of plastic pollution in our oceans. 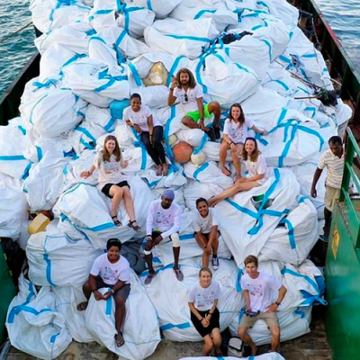 The Aldabra Atoll in the outer Seychelles is an uninhabited UNESCO World Heritage Site, described by Sir David Attenborough as ‘one of the world’s greatest surviving national treasures’. It is home to the biggest population of giant tortoises in the world as well as sea turtles, coconut crabs and white-throated rails.

We saw turtles struggling to get through beach due to rubbish, tortoises eating plastic and one bird with its beak caught up in plastic, not being able to feed. It was all very disheartening to see. In these 5 weeks I feel we've only seen the tip of the iceberg. However, we had an impact, by targeting the important areas of turtles nesting and tortoises grazing. 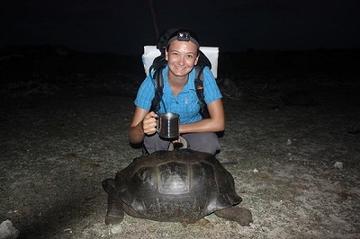 The positioning of this atoll, one of the largest in the world, and the surrounding current network has resulted in a massive build-up of ocean plastic along its beaches. Plastic pollution at such a high level has a detrimental impact on the unique island wildlife both on land and in the surrounding ocean. The fact that the island is so remote and difficult to access has made it difficult to clear the island of rubbish until the Aldabra Clean-Up Project was launched.

Martyna describes her motivation to join the project:

Working on the anthropogenic light pollution for my PhD, I knew how frustrating and complicated it can sometimes get. Picking up plastic from a UNESCO world heritage site felt, however, like something that can be empowering and very fulfilling. Every little piece of trash I will pick up, will be one less danger for turtles, birds and other animals that live on Aldabra, and will ensure that the island will become clean again after so much effort to keep it pristine.