Director of the University China Centre, Professor of the History and Politics of Modern China and St Cross Fellow, Rana Mitter, has won the prestigious Eastern Eye Award for Best Presenter. This is for his BBC Radio 4 programme, Chinese Characters, a series of audio documentaries focussed on key individuals from Chinese history.

The shortlist comprised outstanding Asian presenters who have excelled in Asian or mainstream media, including Bobby Friction (aka Paramdeep Sehdev) for Pump up the Bhangra: The Sound of Asian Britain and Nadiya Hussain for Nadiya’s Family Favourites. 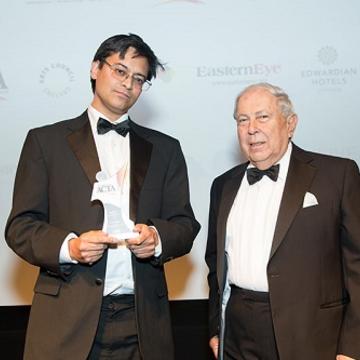 Rana and his award, with Dr Yusuf Hamied, Chairman of Cipla

Chinese Characters includes programmes on Empress Wu Zetian, who grew up a humble lady of the court, but became the only woman in 2,000 years to rule China in her own right, Mao Zedong, who went from a library assistant in the 1920s to the man who ruled over a fifth of humanity later in his life, and perhaps the most famous character in Chinese history, Confucius. The aim is to give as multi-dimensional a picture as possible of China's vast history, with Rana choosing characters from across the centuries.

All episodes from Rana Mitter’s Chinese Characters are on BBC Radio 4 here.