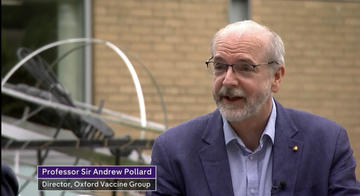 In an interview with Channel 4 News, St Cross Fellow and former Vice Master Professor Sir Andrew Pollard, director of the Oxford Vaccine Group, commented on the importance of creating a plague vaccine and preparation for future pandemics, whatever the disease. The interview was aired on Tuesday 17 August.

In July, researchers at the University of Oxford launched a Phase 1 trial to test a new vaccine against plague.

Asked why a vaccine against the plague is needed, Professor Pollard explained that plaque historically is a devastating disease.

In the Middle Ages, almost half of the European population wiped out by the Black Death, and it took about a hundred years for the population of Europe to recover. But the reason why creating a vaccine is important is although it’s not a global problem today, it is causing outbreaks in communities – the 2017 outbreak in Madagascar (2000 cases). I don’t think it’s very likely that the global plaque pandemic would happen again. But it is the case that there would be outbreaks and continue to have outbreaks in communities where we could intervene with vaccines to prevent those individuals and we absolutely should do.

Professor Pollard explained also that because of the long list of diseases which have a pandemic potential we need to get to the point where we understood how to make vaccines for all of those so we would be better prepared. ‘The reality is that it may be a disease that we are not expecting’, he said.

According to Professor Pollard, we have more than 90% protection from the COVID-19 vaccines that we are now using, and while there is no logical opposition to boosting and it may be important to maintain immunity, there are places where people do not have opportunities to get vaccinated at all.

At this moment, there are many parts of the world where there is no vaccination at all and people are dying every day. So those doses that we do have could have a much bigger impact in other countries at this point. Later on, I think we could revisit whether we need to have more doses if evidence emerged that we would lose certain levels of protection. But today they could have a bigger impact elsewhere. The urgent thing is for those countries which don’t have doses at the moment.

You can watch the whole interview with Professor Sir Andrew Pollard here.