St Cross alumnus and Member of Common Room Peter Nockles (DPhil Theology, 1978) has been celebrated with the publishing of a collection of essays known as a Festschrift.

The launch of the book Religion in Britain, 1660-1900: Essays in Honour of Peter B. Nockles, Bulletin of the John Rylands Library, 97/1 (Spring 2021), edited by William Gibson and Geordan Hammond, was celebrated at an online event in June. The video from the launch is available here.

The special edition features articles on a range of topics connected to Peter's scholarship and networks, including the Church of England (particularly High Churchmanship and the Oxford Movement), Catholicism, Methodism and Church-State conflict relating to the Church of Ireland.

An expert on the Oxford Movement and the religious history of the eighteenth and nineteenth centuries, Nockles was employed at the John Rylands Library from 1979 to 2016. During this time he extended his scholarly generosity and friendship to countless researchers.

As recognition of Peter's work, in 2020, he was honoured with the annual lifetime achievement Gailliot Award. 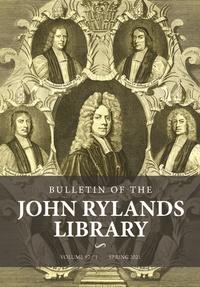 He has published over 90 articles, reviews and editions focusing primarily on early and modern religious history, especially the history of Anglicanism, English Catholicism, Protestant Nonconformity and Methodism. He is also the author of 'The Oxford Movement in Context: Anglican High Churchmanship in Britain, 1760-1857' (CUP, 1994) and Oxford Handbook.