Oxford Blues in the Year Corona

Oxford Blues in the Year Corona

“And so the swath of work, which is going to mature over the course of this year, is the Gretzky work, if you will, it’s going to where the puck isn’t yet.”[i]

To say that it has been a difficult year would be an understatement. Spanning a global pandemic, incessant lockdowns, and the constant threat of contracting the Coronavirus, the 2020-2021 academic year at Oxford University has looked vastly different than any other in recent memory and St Cross College has been no exception.

To meet this challenge, the university has had to adapt in innumerable ways. In some ways, these adaptations have been to the students’ benefit, such as new digital technologies to facilitate individual learning modalities and numerous lectures delivered via Zoom—allowing for the first time in Oxford’s 1000-year history—pyjama tutorials! However, on the flipside, many of these Covid-friendly alterations have come at a significant cost to our St Cross student body’s collective experience. Nearly the entire winter of 2021 was spent in a government-imposed, and strictly enforced quarantine, leading to the cancellation of innumerable hall dinners, social events, and the opportunity to connect in-person with our friends. 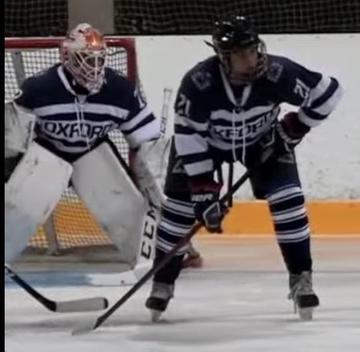 It is in this context of collective loss that I feel lucky to have had the opportunity to participate in one of Oxford University’s time-honored traditions: Varsity Blues Sport.

Thanks to the tremendous leadership of our captains and team-leaders, against all odds, the Oxford University Ice Hockey Club (OUIHC) held an unprecedented six-week season during the summer of 2021. Training twice a week on ice and an additional two times per week in dry-land workouts, the club salvaged what almost assuredly otherwise would have been another missed opportunity stifled in the wake of COVID-19.

Ice hockey might not be the sport that most readily comes to mind when thinking of Oxford University, but the school has a long and illustrious history with the game. First founded in 1885, the OUIHC alumni have included business tycoons, financial luminaries, and heads of state, including the former Governor of the Bank of England Mark Carney and Nobel Prize Winner in Economics Michael Spence. In addition, the annual Varsity Match between Oxford and Cambridge University, first played in St Moritz, Switzerland, is considered the world’s oldest ice hockey rivalry.[ii]

Ultimately, the 2021 season culminated in the 103rd Varsity Match against Cambridge University at the end of June. However, this year’s match looked a bit different: to maintain adequate social-distancing inside Oxford’s ice arena, only approximately 200 fans were admitted (tickets were sold-out within 10 minutes of going live!), and, for the first time, the match was live-streamed over YouTube, garnering nearly 2000 live-viewers from all around the world. Although we ultimately lost this grudge match to Cambridge during the last shot of an overtime shoutout, I am so grateful to have had this opportunity to play with my teammates. 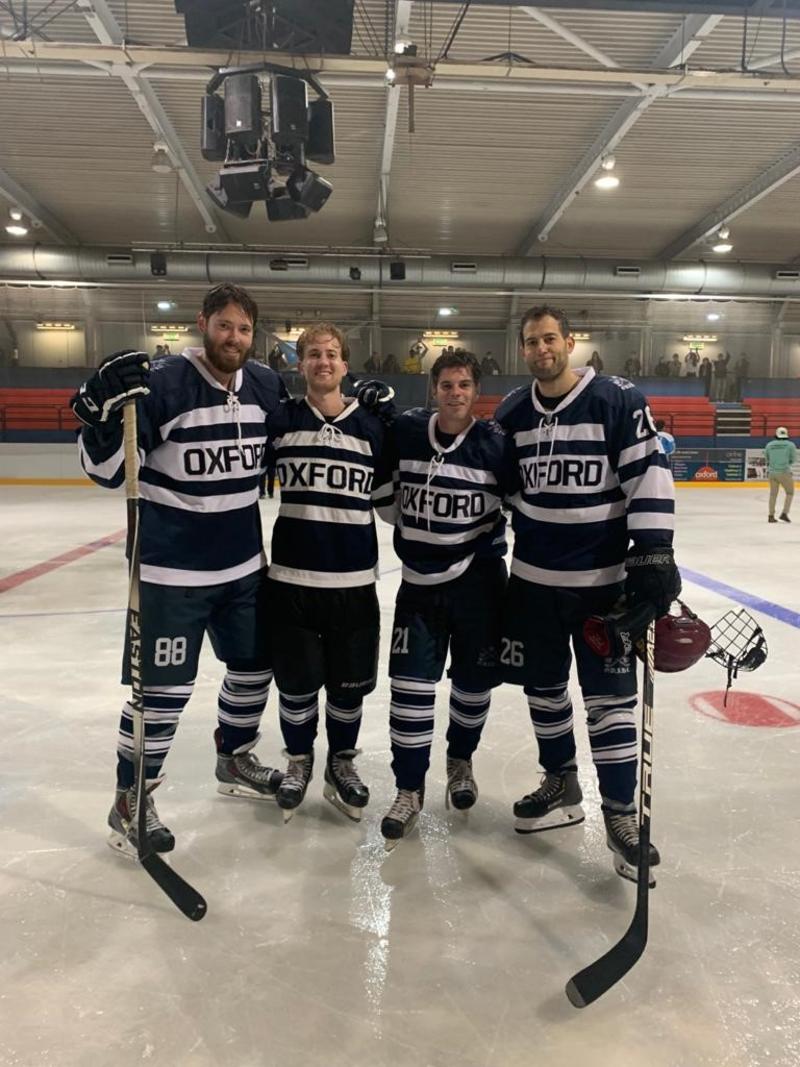 To put into words what my teammates have meant to me is difficult. With so many challenges this year, making some of my best friends from across the university through this team has been nothing short of miraculous. Ranging from my fellow MBA players (shown above) to teammates studying disciplines very different from my own, I’ve learned and grown as a player, person, and professional thanks to their friendship. Even before I started at the university, the hockey club welcomed me with open arms, and I will always be grateful to the captains, coaches, and teammates for all they have offered me.

In this time of international tumult, global health crises, and economic distress, any good news should be celebrated. Even though we didn’t win our match against Cambridge, given all I have gained from the Oxford University Ice Hockey Club, I consider this season a bona fide victory. Ultimately, I am so thankful to the OUIHC and to St Cross College, who generously financially supported me, and hope this story serves as a memento to other Oxford students for a year that took so much, but gave back in spades in other, unexpected fashions.

Jake Schneider is an MBA candidate at the Oxford Saïd Business School, an International Economics graduate from the Harvard Kennedy School, and he has formerly worked at the Brookings Institution, World Bank and Alan Greenspan’s consulting firm.

[i] The quote from Mark Carney is from a Bank of England Governor Speech on October 24, 2013, and can be found here:

[ii] There is some debate about the exact date for the first Varsity Match and more details can be found here: