On 7 October, two St Cross DPhil students, Moritz Moeller and James Wilsenach, won the BR41N.IO Brain-Computer Interface (BCI) Designer's Hackathon in Bari, Italy. BCI research is aimed at producing new technologies by turning human brain signals into machine actions to enhance human capabilities and assist the disabled, such as those with quadriplegia and locked-in syndrome (some of the first work in this area is taking place in Oxford at the Radcliffe Infirmary).

Moritz and James were part of the team that developed Unibrowser, an assistive technology and navigation tool designed to help users navigate difficult problems (such as finding items on the web or on their computer) by asking a series of intelligently selected YES/NO questions. The answers are read directly from users by recording their neuroelectrical activity when focusing on a response to a question. In order to help drive engagement, Unibrowser is structured as a game, driving engagement and helping the team gather more data. The team hopes that further improvements to Unibrowser will help individuals with more complex search and navigation tasks such as finding a book with a specific theme or the perfect holiday destination. In so doing they also hope to help researchers identify the sort of questions to which people respond strongly on a personal and cognitive level.

The competition has been running since 2017 and is sponsored by g.tec Medical Engineering which also provided the Unicorn headsets used by contestants during the 24 hour hackathon. This competition ran as part of the IEEE Systems, Man and Cybernetics conference drawing experts from around the world (and competition judges) in the duel areas of BCI and robotics.

For those who would like to get involved with BR41N.IO you can find out more about their upcoming competitions here. For those interested in research into cognition and consciousness by members of St Cross using recordings of neuroelectrical activity (EEG) and functional Magnetic Resonance Imaging (fMRI) check out  Katie Warnaby's lab. You can also read more about Unibrowser and the competition at James's blog here. Congratulations! 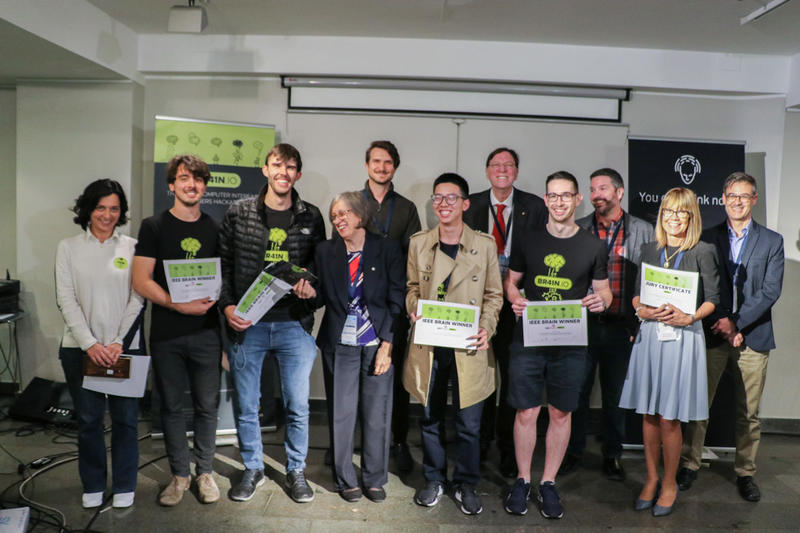 Team Unibrowser, including Moritz and James, second- and third-from-the-left, respectively