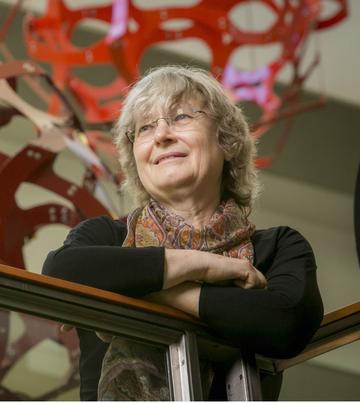 The ongoing pandemic saw the 7th Lorna Casselton Memorial Lecture take place online on Thursday 13th May 2021, marking the second occasion on which this event has been held virtually.

The College was delighted to welcome Professor Ingrid Daubechies (Duke University), who gave a fascinating talk on "Mathematics and Art Conservation" to an audience of over 220 attendees who had convened from across the globe. During her lecture, Professor Daubechies described a variety of applications from her groundbreaking wavelets theory in making possible digitally simulated approaches to art conservation and art history. One example from her work was the digital reconstruction of damaged Italian frescoes, making them virtually intact and seemingly wiping away centuries of deterioration brought about through the passage of time.

Others included the virtual ageing of digitally generated replicas which were given added features to replicate the aging process undergone by the original artworks themselves in order to match the newly digitised version to the artist's original creation. Another example was the virtual restoration of the original artworks themselves, giving them back their appearance from when they had first been painted. The mathematics behind these innovative techniques means that digitised images of artworks are divided into pixels with the analysis getting as detailed as the precise thread counts of any canvas. Image analyses can then be used to determine now absent properties in the original works. Alternatively missing or otherwise worn and faded colours, lines and shapes can be brought back to life and given their former brilliance with amazing results. 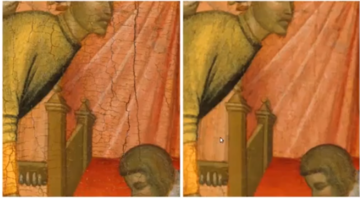 Professor Daubechies provided fascinating insight into how these techniques have been used in practice by highlighting the case of the Ghissi Project and its use of image processing for art investigation, which she referred to as her own version of CSI for the art world. The Project's aim has been to reunite all nine panels of the 14th century altarpiece by Francescuccio Ghissi in a single exhibition for the first time in over a century since being dismantled. The exhibition showcases the digital version of one of the missing panels alongside the other eight original panels.

Professor Daubechies outlined the painstaking work involved in reconstructing the missing panel digitally, which is derived from the information contained in the other panels. Firstly, the scene depicted in the missing panel had to be interpreted and recreated digitally in the style of the eight original physical panels. This newly generated panel then had to be virtually aged to match the now faded colours contained in the eight originals along with the gilding of the pictured saint's halo, which was made duller and given small cracks so that it could accurately mimic the appearance of paint that had undergone several hundred years of aging. 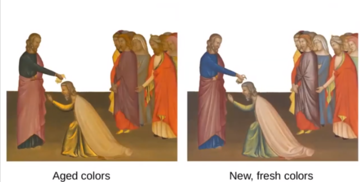 The remarkable power of these mathematically-based techniques was illustrated still further when Professor Daubechies explained that these processes could also be applied in reverse by generating high resolution images of the existing 14th century panels to create rejuvenated and refreshed versions through digital image manipulations so that their faded colours now correspond to freshly painted versions. Professor Daubechies concluded that this very detailed form of image analysis can breathe new life into many paintings and artworks from around the world and further complement the work of art conservators who have traditionally focussed on physical preservation techniques.

Professor Daubechies' inspiring talk was followed by a lively Q&A session in which many of the points on how these techniques work were explored further with refreshing openness.

The video of the lecture can be seen here.