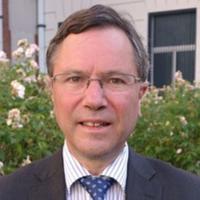 NATO's role as an international partnership for science and technology R&D and its application not only to security operations but also to humanitarian and disaster relief as well public health framed the focus for the 6th Lorna Casselton Memorial Lecture, the first in the series to be held virtually, which took place on Thursday 29th October 2020. The College was delighted to welcome Dr Bryan Wells, NATO Chief Scientist, who spoke on "Science in Peacekeeping and Security" to an audience of over 250 attendees from across the globe.
In his lecture, Dr Wells outlined NATO's extensive scientific R&D programmes, spanning everything from the organisation's response to natural disasters and humanitarian aid to its support on national efforts to combat COVID-19. This is made possible by NATO's Science & Technology Organization (STO), the world's largest internationally collaborative defence science and technology network. The STO brings together government, academic and industry partners consisting of over 6,000 scientists and engineers from over 30 nations, pursuing 300 projects at any given time and supported by a budget of €300 million per annum. Dr Wells outlined examples of several key strategic scientific initiatives currently being developed, namely 3D scanning for clothing fit, the development of an ice prediction model for the Arctic Ocean and passive Radar technology.

Dr Wells highlighted that at the top of the STO's research agenda for the future is excellence in some of the most disruptive emergent technologies of our times, including AI, Big Data, autonomous systems, quantum computing, space and bio-technologies, hypersonics and novel materials. He also noted that most new technologies are no longer the preserve of national governments or even the global defence sector but are more frequently driven by 'big tech' and the civil technology sector, as demonstrated by advances in AI, data science and energy. This transformational development in the global technology ecosystem offers both risks and opportunities which inform NATO strategy. There has been much discussion about the intensification of competition between nations in attaining supremacy in next generation technologies and the ethical issues surrounding AI and Big Data. Dr Wells spoke to this by emphasising the importance of achieving a technological edge in such areas through international collaboration, whilst at the same time remaining true to the core norms and values of NATO member states, whether in the upholding of international rules and standards or in adherence to democracy and diversity.

Dr Wells reflected on NATO's changing priorities with an emphasis placed on engaging early career scientists and specifically women scientists in the organisation's efforts to both innovate and diversify its thinking and approach to problem solving. In a complementary approach, NATO is also making active efforts to reach out beyond its core membership to non-NATO member nations, such as Australia, Japan, India and South Korea, in order to further diversify its networks. Dr Wells' thought-provoking talk was followed by a lively Q&A session in which many of these points were explored further with refreshing openness.

The video of the lecture can be seen here.