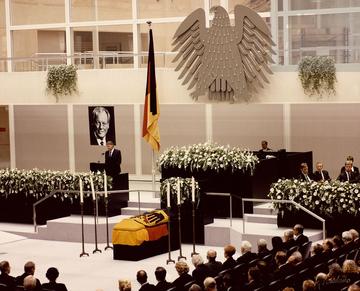 In the late Cold War, their “father-son” political relationship stood out as an example that, considering the current tensions with Russia over the Ukrainian conflict, is just as relevant today.

“I am grateful and movingly honoured the Federal Willy Brandt Foundation has chosen to support and recognise my research,” said Marina, when the award was announced. “I am humbled by the award and thrilled by the prospect of sharing the research with other scholars and the wider public soon.”

Her research is based on interviews with senior policy makers; archival material from the Ebert Foundation in Bonn; fresh material from Austria, Spain, Sweden, Portugal and the United States, and exclusive additional private papers.

The three political-intellectual pillars that sustained Brandt and González's relationship – democracy, social democracy and internationalism – were interconnected and strengthened their special ‘father–son’ relationship and shared desire to project their brand of socialism across Europe and the world.

Brandt and González's international experience and global vocation also drew them together.

‘German citizen to the core, European citizen by conviction and world citizen by vocation’ is how González described Brandt at his state funeral.

By focusing on the Brandt–González bond, Marina’s article extends Kellerman's 1978 study on Brandt's relationship with his own mentors and fills some of the gaps in the many published biographies of Brandt.

In addition, it provides new biographical and political information about Brandt and González, which can be valuable for studies on political mentorship, particularly transnational mentorship, international leadership and transnational networks, as well as for the broader study of Spanish–German relations, democratisation, the European left and the Socialist International in the late and early post-Cold War period.

Marina’s article was published as Europe and the world saw – and continues to see – a severe deterioration in relations between Russia over its Ukraine invasion; some calling it a “Second Cold War”.

Marina’s new research into this Father-Son example of international cooperation, may help bring insight into bridging divisions in another such polarised time.