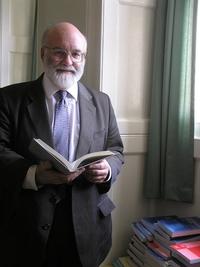 St Cross Emeritus Fellow Professor John Barton has won the 2019 Duff Cooper Prize for non-fiction. He was also shortlisted for the 2020 Wolfson History Prize. Both honours are in recognition of his book A History of the Bible: The Book and its Faiths, which was published last April and which 'demonstrates that the Bible is not the fixed text it is often perceived to be, but the result of a long and intriguing evolution'. The Wolfson judges lauded John's book as 'a wise and wide-ranging work that offers exciting new perspectives on a book which has inspired both bloody conflicts and profound wisdom'.

John is a priest in the Church of England and was a Fellow of St Cross College from 1974-1991 and the Oriel & Laing Emeritus Professor of the Interpretation of Holy Scripture from 1991-2014. The College congratulates him on his book's accolades.