The College is deeply saddened to announce the passing of Founding Fellow Dr Ruth van Heyningen.

Ruth enjoyed a distinguished career as a research biochemist and ophthalmologist. Alongside her husband, Kits, St Cross’s Founding Master, she helped lay the foundations and establish the ethos of the College and establish its position within the University of Oxford.

Ruth read natural sciences at Cambridge and graduated in May 1940, shortly thereafter marrying Dr William Edward van Heyningen (known as Kits). She then began a PhD working with Robin Hill, a pioneer in the biochemistry of photosynthesis, and Malcom Dixon, the notable enzymologist. This work, on the effect of poison gases on metabolically important enzymes, was classified and she could not publish it as a PhD. Instead, she and Kits moved to London where she worked at the Lister Institute of Preventive Medicine on blood group antigens, working with Walter Morgan and Winifred Watkins. In 1943 their son Simon was born, and in 1944, they welcomed their daughter Joanna.
The family moved to Oxford in 1947, and Ruth began work on a DPhil with the Anatomy Department under the supervision of physiologist Joseph Weiner (who exposed the “Piltdown Man” forgery). Upon completion of her DPhil on the composition of sweat and adaptation to hot climates, she joined the Nuffield Laboratory of Ophthalmology where she completed the most important work of her career, on the biochemistry of the eye.

Most of Ruth’s work was about understanding the metabolism of the lens, particularly its relevance to the formation of cataracts. This involved the development of many new techniques to identify relevant compounds and their interactions, such as the “sorbitol pathway”, implicated in problems in many tissues – research which led others to elucidate the mechanism of sugar cataracts and to develop techniques for slowing the onset of this process. Ruth also pioneered studies into fluorescent glycosides in the lens and the role of tryptophan metabolism in the development of cataracts, an extension of her work on fluorescent components. In 1956, Ruth and her friend and colleague Antoinette (Tony) Pirie published The Biochemistry of the Eye, a pioneering account of a new field which became a standard text for years to come.

In 1973 Ruth was recognised with a DSc from Oxford and was presented with the Proctor Medal of the Association for Research in Vision and Ophthalmology in 1976.

It was in the early 1960s that Kits and Ruth both retired, and that Kits became the Founding Master of St Cross College. Ruth’s attentions were turned to College business, and she and Kits often held College dinners at their house in North Hinksey. It was thanks to Ruth that the College was able to acquire its early art work through the Treverton Trust. 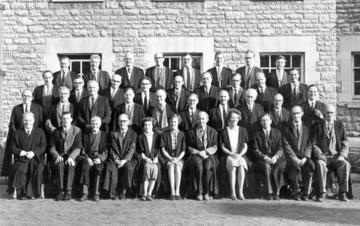 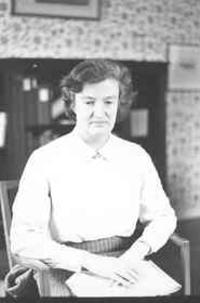 Ruth in the 'Wooden Hut', in the early days of St Cross

Ruth was a Fellow of the College until 1979 and thereafter continued a close relationship with St Cross. 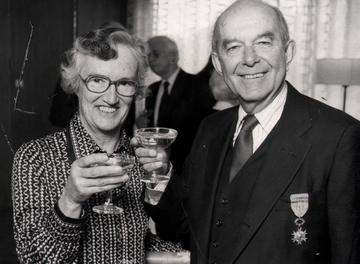 Well into her 90s, Ruth continued to be extremely active in Oxford, amongst other things, volunteering in the local Oxfam bookshop and being an active member of the Oxford Preservation Trust.

The College was honoured to be able celebrate her 100th birthday with Ruth in October 2017 and to acquire artwork by the English artist John Piper, who had been a friend of Ruth and Kits, to mark the occasion. This piece now hangs in the College’s West Wing. 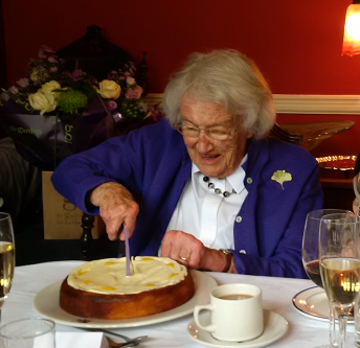 Ruth will be much missed by her many friends at St Cross and in Oxford.

With thanks to Simon van Heyningen

References
A Spector; On presentation of the Proctor Medal of the Association for Research in Vision and Ophthalmology to Ruth van Heyningen.. Invest. Ophthalmol. Vis. Sci. 1976;15(9):683-684.