Looking back over Hilary Term

Looking back over Hilary Term

Another term done: and what a few weeks it’s been.

We’ve had snow, a Royal visitor, and the Oxford Literary Festival and, as the clocks have gone forward, spring might just have arrived.

Firstly: snow! The best kind of snow – it fell quickly, generally speaking did not freeze into dangerous sheets of ice, and then vanished very quickly. Oxford looks particularly beautiful in the snow, not least our open spaces: and Rosie loves it! 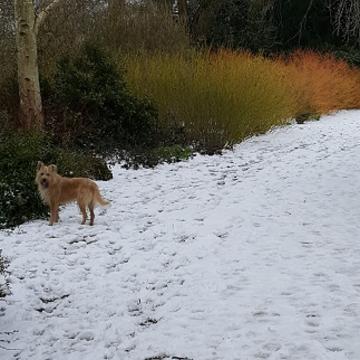 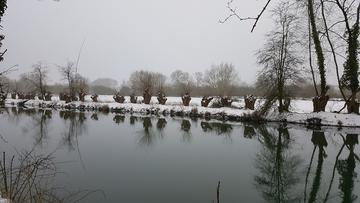 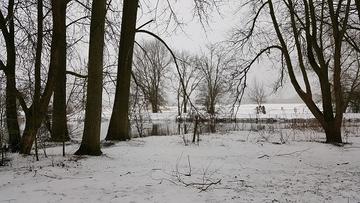 And then (drum roll here) our Royal visit! We were delighted that His Majesty, Sultan Muhammad V, King of Malaysia, accepted our invitation to become an Honorary Fellow of his old College, and joined us in person for a ceremony and celebration dinner. Despite the snow, the event went off wonderfully well. His Majesty spoke with our Malaysian students and met a host of dignitaries from the University and the City. It was an evening to remember for a very long time and another reminder – should we need it – of the international make up of our alumni. 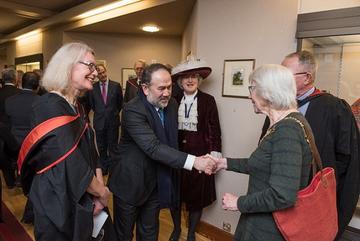 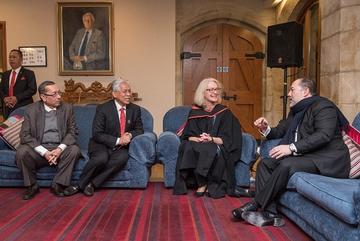 The Wolfson/St Cross rowers were disappointed that Torpids was cut short by snow – when was the last time that happened?, I wonder – but the various boats still managed several bumps.  On Boat Race day we were also absolutely delighted to have Laura Depner and Rachel Anderson in the Women’s Reserve Race and Abi Killen in the Women’s Race. It was not to be a victory this year, but it is a tremendous honour to row in the event and we are very proud indeed of all three.

Other events in College may have had slightly less profile, but continued to provoke thought and discussion. The Special Ethics seminar looked at brain-machine integration; the Art at StX programme brought us Catrin Nye discussing a showing of her documentary ‘Our World: Welcome to Germany’ – her straightforward explanation of the ethical responsibilities of a journalist was inspiring and humbling in equal measure; we also had a showing of ‘All Watched Over by Machines of Loving Grace’. The final session in the Global Thinkers of the International series focused on Jawaharlal Nehru and was again extremely well-received. Michael Loginoff organised a talk on Possibilities and Limitations of Global Citizenship from a former supervisor, Professor Adam Howard, who was visiting Oxford.

The second AfOx Insaka at St Cross saw Professor Garret Cotter and two of his collaborators talk about exploring the high-energy universe from Namibia, using particles travelling faster than the speed of light, whilst Dr Amma Serwaah-Panin spoke on “God insures those who pay? Insurance and religious offerings” – which considered how economic analysis can be applied to understanding the financial impact of charismatic churches in Nigeria.  This is such a fascinating and illuminating series of events, and I am pleased that St Cross will continue to be associated with them: future dates and topics here: http://www.afox.ox.ac.uk/event-directory/insaka.

We lent Tim Shaw’s piece, ‘Mother the Air is Blue, The Air is Dangerous’ to the Exchange Gallery in Penzance as part of the exhibition to accompany the installation of the same name. It looks magnificent and the installation, which David and I visited this week, is incredibly powerful. 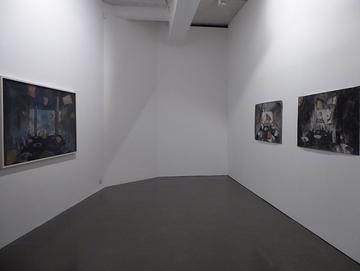 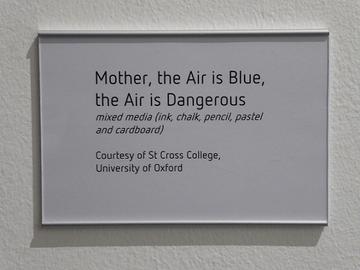 While the work is on loan, Tim has lent us a number of pieces in its place, which can be seen in the foyer of the West Wing.  I admit to having a particular soft spot for the raven: 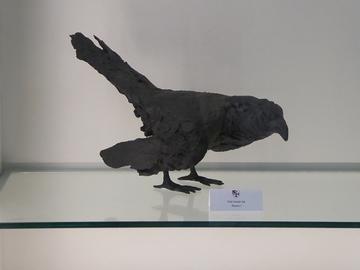 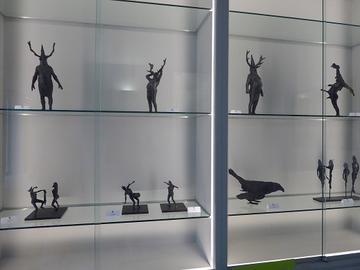 Also on a cultural theme, I should mention that Sam Bruce compered the annual Musical Evening while also contributing himself, and that the Ball Committee announced the theme of this year’s Ball, launched the tickets and has already sold out!  There is a waiting list.

Work continued on the building for much of the past few weeks, but I am delighted that the scaffolding has now all gone, new tables and chairs have arrived for the outside areas and the College looks lovely for the summer.

The Literary Festival is a big part of each year’s calendar in Oxford.  This year the College was one of the Festival’s major venues. We hosted the celebratory Festival dinner, and our wonderful Baxter Storey team impressed the celebrity chefs who cooked in their kitchen for the night. Festival-goers were loud in their praise for the venue and – with the possible exception of an unexpected, and rather spectacularly messy, cookery display – we loved having them. 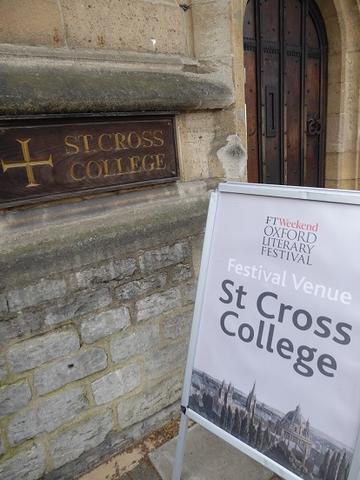 It was a particular pleasure for me to introduce a former colleague, James Stourton, whose talk, billed as being about his beautiful book on British Embassies, covered so much more.

The Festival really puts the College on the map, and this year’s display of books by St Cross authors in the foyer cabinets was a great reminder of the breadth of subjects covered by College members. If you didn’t see your own book in the display, perhaps you forgot to send Sheila a copy – it’s never too late to put that right!

Victoria Cox organised a first informal alumni event in London for those who were happy to drop in and have a chat over a drink, in the splendid surroundings of The Old Bank on the Strand.  This was part of our aim to offer alumni a variety of ways of keeping in touch with one another and with College and is definitely something we will do again. If anyone would like to organise something similar, do get in touch, as we would be happy to offer help and advice: alumni@stx.ox.ac.uk. 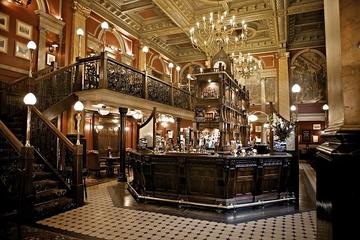 I also attended the University’s Alumni weekend in Rome. St Cross and Wolfson alumni enjoyed a private visit to the Keats and Shelley House by the Spanish Steps on Friday evening and I introduced a session on Rebuilding History given by Professor Andrew Wilson and Dr Alexy Karenowska, as part of the Academic programme on Saturday. 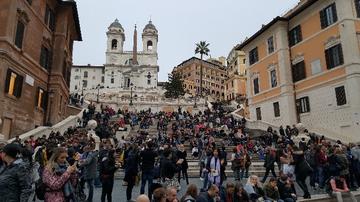 On Sunday the British Ambassador entertained us at her magnificent residence the Villa Wolkonsky. 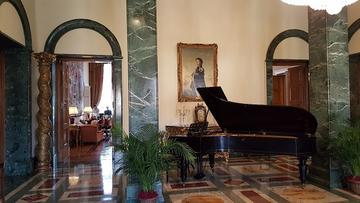 As well as Chairing a meeting of the Conference of Colleges’ Equality and Diversity Forum I have attended a number of other university-wide meetings on equalities issues.

I enjoyed the presentations at the University Museums Board and chaired a meeting of the University Museum of Natural History’s Board of Visitors. The latter gave us all an opportunity to hear from curators about some of the amazing pieces in the Museum’s collections – from meteorite material, to a tightly rolled armadillo specimen, to the trowel used to lay the first stone of the Museum building itself. We completed the full agenda, despite being evacuated from the Museum due to a fire alarm: thanks to Professor Charles Godfray who led us down the road in crocodile formation to his office in the Oxford Martin School.

If you haven’t yet seen the Museum’s new exhibition, Settlers, in the Upper East Gallery it is well worth investigating. There is also a full programme of accompanying activities: http://www.oum.ox.ac.uk/visiting/Settlers_programme_web.pdf

Engaging College with the City

I was pleased to speak at an Oxford Management Club dinner and to meet a wide range of people who are committed to the city. A number have subsequently been into College to find out more about who we are and what we do and have been unanimously complimentary about our facilities and, of course, our food.

I was really pleased to welcome the first of two groups from Oxford Civic Society into College to see how much the new West Quad has added to our facilities. The visit was oversubscribed and another great example of how keen people are to find out about what sits behind the heavy door on St Giles.

Following an introduction from the High Sheriff of Oxfordshire, Jane Cranston, I crossed St Giles to find out more about the work of The Gatehouse, an extraordinary organisation which offers food, support and help with essentials such as clothing and toiletries to those without a settled or secure home. I hope to write more about The Gatehouse in future blogs as so many College members are concerned about how best to help homeless people in Oxford.

I have recently become Chair of Oxford Preservation Trust’s Planning Committee and, as a Trustee, have attended a number of meetings and discussions. I spoke on the Oxford Cultural Leaders’ programme and shared a presentation at St Cross with Alfredo Perez de Arminan, President of Patrimonio Nacional in Spain, on Spanish and UK cultural heritage. This was also supported by the Cervantes Institute in London.

As a Trustee of Historic Royal Palaces I spent a day at Hillsborough Castle in Northern Ireland looking at the work going on there to open the site to more visitors. It was rather an overcast day, but the sun came out just as we were passing the moss walk: 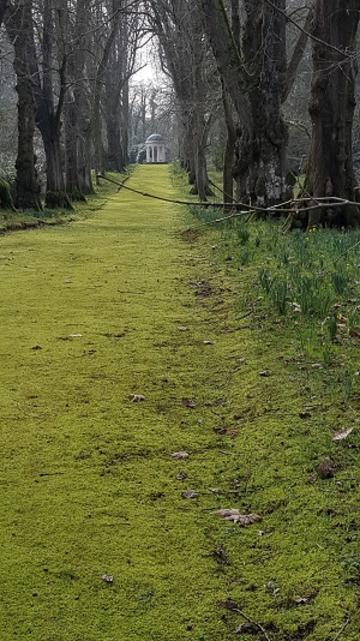 Our Board meeting this month was held at the Tower of London and followed by an event to mark the opening of a new events Pavilion at Kensington Palace. 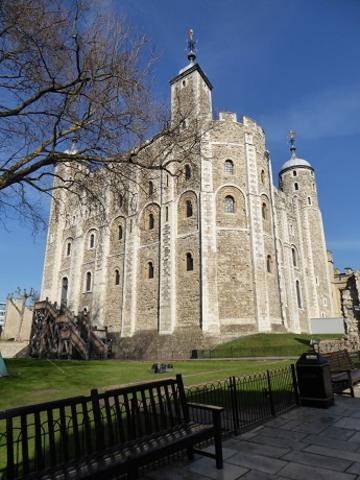 Next term we’re looking forward to another full programme of College activities, celebrating success at an Encaenia dinner, and thanking our donors and supporters at a number of events. We’re hoping for good weather for Eights and continuing to engage with alumni across the world. I’m off to the University event in San Francisco in 10 days’ time. More on that next time.