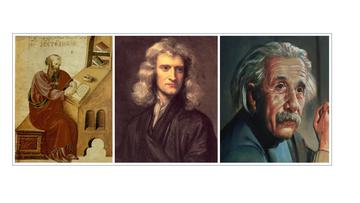 The HAPP Centre was delighted to welcome the renowned theoretical physicist and bestselling author Professor Carlo Rovelli (Aix-Marseille University) on 4 June 2021 to give a lecture on "Scientific Thinking Across the Centuries and the Foundations of Physics" to over 1200 attendees online from around the world.

Professor Rovelli gave an expansive yet detailed review of the history of scientific thinking and how this had evolved over the centuries. Echoing the words of Sir Isaac Newton, he noted that scientific discovery and learning is rooted in a cumulative process, building on previous ideas and knowledge. Professor Rovelli then explained how eminent philosophers of science, including Karl Popper and Thomas Kuhn, had reshaped our understanding of how scientific knowledge develops and expands. In light of that, he argued that science is important for gaining a reliable understanding of nature and is not about formulating an ultimate and unchanging version of knowledge. Instead, it is more fundamentally about learning more over the course of time. Professor Rovelli next considered an example comparing aspects of Newtonian physics to those of modern physics, such as quantum mechanics, before turning to the original ideas of Aristotle who laid the foundations of the study of physics. He posited that Newton had built upon Aristotelian physics with his equations of motion before Einstein, in turn, drew upon on classical Newtonian physics in order to extend this further with his own more advanced theories on motion.

In conclusion, Professor Rovelli summarised that whilst there is continuity in the conceptual and analytical approaches that underpin the study of physics, such stability does not necessarily characterise new waves of empirical findings. As a consequence, those parts of existing scientific knowledge which do not work with empirical evidence can be discarded and replaced by further concepts, yielding new results based on an expanding evidence base. This process collectively moves science forward in a progressive fashion.

Live Q&A posted online throughout the event saw dozens of questions from members of the audience with Professor Rovelli giving additional insights into the more philosophical aspects raised by principles of scientific method.

Despite the ongoing pandemic and associated social distancing restrictions, the HAPP Centre continues to grow from strength to strength with a new virtual format offering new and exciting possibilities for bringing together not only an Oxford audience but also one with nationwide and global attendance.

A video of the lecture is now available at https://www.stx.ox.ac.uk/event/scientific-thinking-across-the-centuries-and-the-foundations-of-physics.