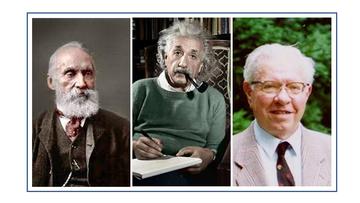 The HAPP Centre was delighted to welcome Dr Mario Livio on the 25th February 2022 to give a lecture on ‘Brilliant Blunders - Mistakes by Great Physicists That Changed Our Understanding of the Universe’ to over 500 attendees online from around the world.

Dr Livio covered three great physicists - William Thomson (Lord Kelvin), Albert Einstein and Fred Hoyle are amongst the greatest physicists in history and some of the mistakes that these towering figures made led to major scientific advances. Dr Livio analysed these errors and the psychology which made such "brilliant blunders" part of these celebrated scientists' genius and part of the scientific process whereby science thrives on error and advances when erroneous ideas are disproven.

Lord Kelvin's blunder related to the age of the Earth which he estimated as being around 100 million years based on the time needed for a primordial molten planet to cool to its current temperature and by assuming that heat is transported with precisely the same efficiency throughout the entire depth of the Earth. This was shown not to be the case and by allowing for convection in the Earth's mantle, it was later found that the Earth's true age is about 4.5 billion years.

Albert Einstein's blunder was the introduction of a cosmological constant into his General Theory of Relativity, a repulsive force that balanced the gravitational force of attraction in order to avoid the Theory predicting that the Universe would collapse under its own weight. When it was later found that space-time was expanding, Einstein finally removed his fudge-factor cosmological constant since his Theory was compatible with an expanding Universe without this added term.

Fred Hoyle's blunder was in his proposal of the steady-state model of the Universe to counter the Big Bang Theory even when with newly developed technology astronomers started to see galaxies evolving and the leftover radiation from an initial cosmic explosion. His blunder was compounded as he continued to try and invent ways to retain the steady-state model despite the evidence for the Big Bang model becoming overwhelming.

Live Q&A posted online throughout the event saw dozens of questions from members of the audience with Dr Livio giving additional insights into the three blunders he had discussed and demonstrated that these were truly brilliant blunders because in one way or another they led to insights that created real scientific breakthroughs.

A video of the lecture is now available here.