On Saturday 2 March, we combined our annual College and alumni gathering, known as ‘Fred’s Lunch’ in honour of our late fellow Fred Hodcroft, with a day of ‘Exploring African Connections’ culminating in a celebration of the gift of the collection of books published by James Currey.

The main part of the day was bright and sunny, allowing our guests to enjoy the College’s outside spaces as well as the Lecture Theatre and public spaces of the West Wing building.

We began, inevitably, with hospitality: coffee, tea and warm pastries to welcome our guests and put them at ease for the day.  It was obvious from the off that the spirit of St Cross was going to work its magic, as guests ranged across the generations and new contacts were made. 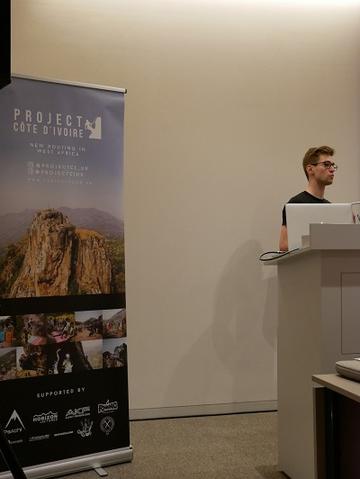 The formal proceedings started with a series of talks from current students and recent alumni, illustrating the variety of their interests in and studies on the African continent.  Ryan Timms described the climbing expedition he recently completed, with a small team, in Côte d'Ivoire.  Beautifully illustrated thanks to still and moving pictures from one of the team members, Ryan’s talk had audience members gasping at the physical challenges which the team faced.  The next stage is to produce a climbers’ guide to Côte d'Ivoire, with a view to encouraging responsible tourism, and keeping in touch with the local students they introduced to bouldering. 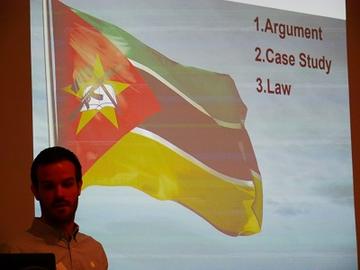 Brooke Parkin addressed the issues of law, political power and land rights in Mozambique, in the context of the huge reserves of natural gas found off the coast of the Pemba region.  His fieldwork gave him very acute case studies of the disparity between a legal framework which is apparently highly protective of farmers’ rights to own land but can be interpreted in such a way as to leave those farmers with very little right of redress if State action which is detrimental to them is deemed to be in the ‘public interest’ (a topic, incidentally, which resonated hugely with one of the talks at the AfOx Insaka on 8 March, Malcolm McCulloch’s provocative ‘Is Energy Bad for Africa?’).

Clare Kelly then presented a fascinating comparison between the treatment by scholars of the literature of Amos Tutuola and D O Fagunwa.  She argued convincingly that there was little justification for the different treatment of and assumptions about the motivations behind the writings of the two men. 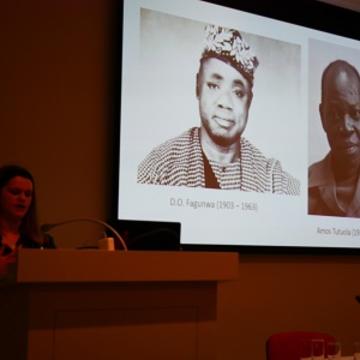 And finally, in the pre-lunch session, Catherine Namwezi presented her research in Kampala’s huge informal market, Owino – a place named after an early trader who was also discovered to be a serial killer! Catherine focussed on the impact of the very high levels of unemployment amongst graduates in Uganda.  She gave us examples of the life histories of three graduates she found working in Owino.  In many ways this was a disturbing picture of apparently wasted personal and family investment in education.  Yet Catherine’s research demonstrated that there was still enormous commitment to funding university education amongst parents who had not had the opportunity of that education for themselves. 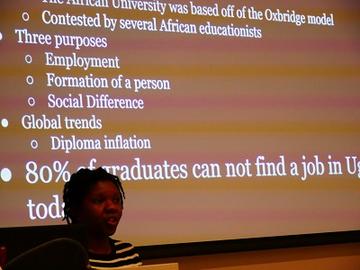 At this point those of the audience who were joining us for lunch adjourned to the Common Room where we met up with other guests.  Familiar faces were sought out, and new contacts made.  As always happens at such occasions, unexpected reunions occurred.  Emeritus fellow John Tiffany found himself sitting next to an ex-student at lunch, talking about ophthalmological research being undertaken by our current Knoop-funded Junior Research Fellows, with our Fellow Hung Cheng, himself a distinguished ophthalmological surgeon, sitting just along the table from them both. It is this serendipity which always makes College gatherings such enjoyable and lively events.

The catering team had come up with an African-themed meal which reminded all our guests just why St Cross has such a reputation for great food and hospitality.

Our post-lunch session kicked off with a lecture by Professor Richard Reid on ‘Imperial partitions: Rethinking African and global history at Oxford’. Richard challenged us to consider why African history and African studies need to pay more attention to the continent before colonialism than they do at present.

We then had a panel presentation by a trio of alumni led by Dr Bronwen Everill, lecturer in History at Cambridge University, talking about the book on which all three had collaborated (The History and Practice of Humanitarian Intervention and Aid in Africa: Palgrave MacMillan 2013). 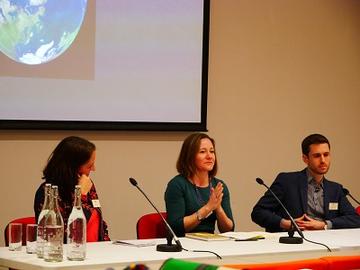 Bronwen’s academic work continues with a new book to be published within the next twelve months on Just Commerce: Ethical Capitalism in the Age of Abolition. Claire Leigh is Head of International Development Policy at Save the Children UK, and Dr Josiah Kaplan is Senior Research Advisor on Migration and Displacement Affairs at Save the Children International, also based in London.

A coffee break followed – only twenty minutes late, which, given the interest in each presentation, was testament to those chairing sessions.

The Lecture Theatre was soon bursting at the seams as an even larger audience returned to hear a warm, challenging and incredibly inspiring panel discussion convened by alumna Janet Remmington.

The panel was adroitly chaired by Dr Carli Coetzee from SOAS, who is editor of the Journal of African Cultural Studies.  James Currey graciously filled the ‘godfather’ role, alongside Margaret Busby, Ellah Wakatama Allfrey, Nana Ayebia Clarke, Zaahida Nabagereka and Bibi Bakare-Yusuf. Sadly, Sylvester Onwordi was not able to be with us, due to family illness. The professional power and presence of the panel was awe-inspiring and had the audience fully engaged from the first introductions. 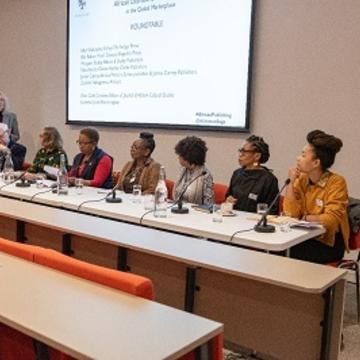 Ellah talked about the importance of using influence as a publisher to ensure that African writers are included in key editions – for example, selecting works from the Modern African Writers series for Penguin Modern Classics. Is the bookshelf complete? No, not by a long way.

Nana talked about documenting the narratives of all African women and publishing not just for Africa but for the world. More African writers need to be on reading lists: writers who deal with the real Africa, not the ’dependent’ Africa too often portrayed in western media.

Zaahida talked about engaging with young people where they are and via the media they use. Afrikult. works with young people from the age of 9-14. She had asked a class which African writers the students had heard of: the answer - ‘Isn’t that just slavery, miss?’ – illustrating the scale of the challenge.

Bibi focussed on the archive: what will be found of African writers when future readers look back at what is being published now? Books are an instrument of power.

In discussion the panel talked about the need to sell books wherever people meet, to encourage writing and reading of all kinds of material. There is, for example, a real public enthusiasm for genre novels from African writers – but these are often not seen as serious African literature. The wide sweep of historical and family saga novels gives space for writing about aspects of history which are not addressed elsewhere. Such literature importantly addresses issues through African rather than non-African eyes.  Both Nana and Bibi talked about the capacity for writers to explore lived experience in fiction in a way which reaches beyond legislative or political norms, for example concerning sexuality.

There was enthusiasm for the growth of festivals and reading groups, but a recognition that, when the panel could name all the major festivals on the continent between them, there was clearly still a long way to go. In answer to a question about World Book Day the panel wished that the organisers would ask African publishers what they would like to see featured and included on reading lists, rather than simply publicising selections that they made themselves. 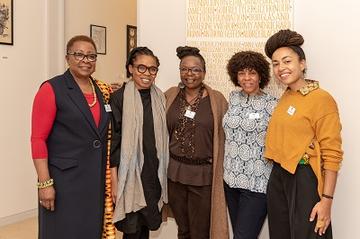 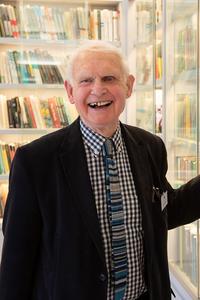 After such a thought-provoking panel discussion, it was not surprising that the noise and excitement levels kept on rising as we moved into the formal opening of the Currey collection. I explained why the College was so delighted to house a complete set of the works published by James Currey; James himself talked about wanting to keep the collection together; Wendy James explained her role in the process and Lynn Taylor reinforced Boydell and Brewer’s commitment to keeping the collection up-to-date in years to come. We then all raised a glass to the Currey collection before continuing conversations throughout the ground floor of the West Wing. 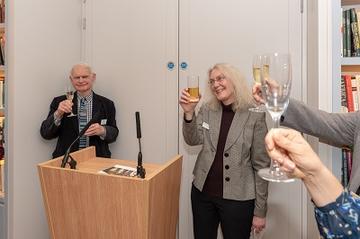 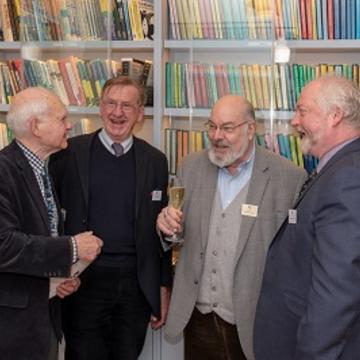 To round off an extremely full and exciting day, Dr Tsehai Berhane-Selassie launched her book, Ethiopian Warriorhood – recently published by James Currey, after many years of encouragement from Wendy James. 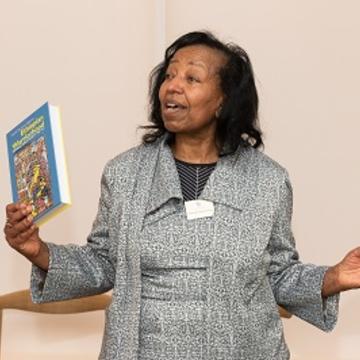 After which, the conversation continued… 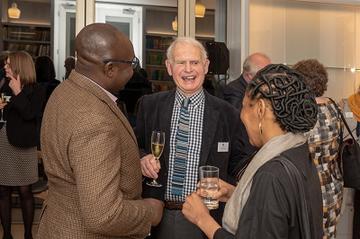 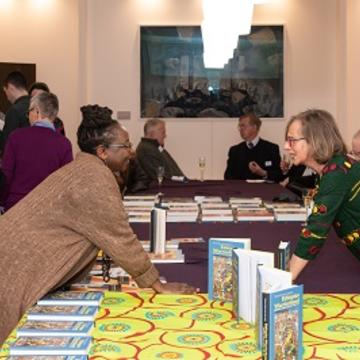