Recognizing his 2012 paper introducing the fundamental concept of factorized databases

Emeritus Fellow Dan Olteanu has been awarded the 2022 Test of Time Award. Presented by the International Conference on Database Theory (ICDT), this award recognizes a paper presented 10 years prior at the ICDT conference that has best met the "test of time" and had the highest impact in terms of research, methodology, conceptual contribution, or transfer to practice over the past decade. 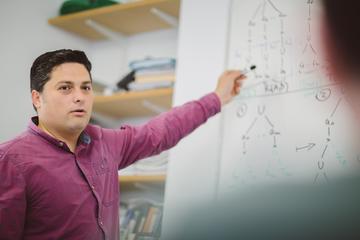 Dan Olteanu is an Emeritus Fellow of St Cross College and professor of computer science at the Institute for Informatics, University of Zurich. The 2012 paper which earned him this award is "Factorized Representations of Query Results: Size Bounds and Readability," co-authored by Jakub Závodný, an alumnus of Merton College and Olteanu's former DPhil student.

Their paper introduces the fundamental concept of factorized databases. Such factorized databases give a proper balance between succinctness of the data representation and efficiency of subsequent processing. The paper presents several contributions in terms of mathematical characterizations, algorithmic techniques, and computational complexity.

The awards committee stated, “Factorized databases are acknowledged as an inspiration within many lines of practical and theoretical research.”

Olteanu’s paper initiated a new line of research and had a significant impact on theoretical and systems research and development in the field of data management, in particular on graph database systems, representation and enumeration of answers to database queries and of their provenance, low computational complexity for answering quantitative queries, and training machine learning models over large databases.

This work also laid the foundations for Olteanu's 2015 ERC consolidator grant and his 2014 Google Faculty Award.

Together with his research team, Olteanu previously won a Best Paper Award at the International Conference on Database Theory for their 2019 work on the first dynamic algorithm for counting triangles in graphs in worst-case optimal time.

ICDT is an established and prestigious series of international conferences on research in the foundations and theory of data management.  Since 2009, ICDT is held annually and jointly with Extending Database Technology (EDBT), a non-political and non-profit organization for promoting and supporting research and progress in the fields of databases and information systems technology and applications.

This year’s conference was scheduled to meet in Edinburgh, Scotland, but was instead held online.

Congratulations on this award, Dan Olteanu!