BBC Panorama tells the story of the Oxford Vaccine

BBC Panorama tells the story of the Oxford Vaccine

On Monday 14 December 2020 the BBC aired an episode of Panorama, their flagship investigative documentary series, telling the story of the development of the Oxford vaccine.

Professor Pollard told the story of how he first heard about the seriousness of the coronavirus when he shared a taxi with a modeller working for SAGE (the UK government's Scientific Advisory Group for Emergencies), hearing that the data suggested there was going to be a pandemic akin to the 1918 flu. He said:

I went from someone who was aware of a small outbreak in China, which was of academic interest, to realising that it was going to change our lives. It was a chilling moment. 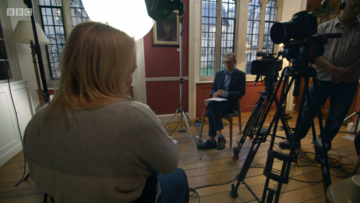 Filming in the van Heyningen Room

He got in touch with Professor Sarah Gilbert, who was already working on a vaccine, and they agreed to collaborate on a clinical trial. The programme follows the significant challenges the team faced, from sourcing PPE, to finding grant money, to recruiting volunteers for the crucial trial phases.

Most of the interviews were conducted at St Cross College, and keen-eyed viewers will have spotted the van Heyningen Room in the background, as well as the St Cross and Pusey libraries.

It was a privilege to host the Oxford vaccine team and BBC crew, and play a small part in the making of a fascinating programme. You can watch the episode here.

You can keep up-to-date on the latest Oxford Vaccine news on their dedicated website here. 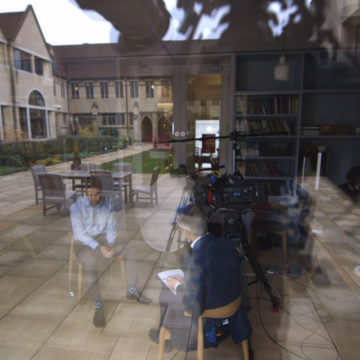 Filming in the Library