St Cross DPhil student Teele Palumaa (DPhil Clinical Neurosciences, 2016) participated in the Oxford-Cambridge joint athletics match against Harvard-Yale last weekend, winning the high jump for the third year in a row. Oxford-Cambridge regularly compete against both Harvard-Yale and Cornell-Penn in what is known as the 'Transatlantic Series', the world's oldest international athletics match series.

Earlier this year Teele gained a Blue in both high jump and triple jump, as well as a Half Blue in discus throw. She also holds the University of Oxford high jump record, set in 2017, of 1.78m, and won high jump in Varsity matches in 2018 and 2019.

Teele is now training for combined events - watch this space! 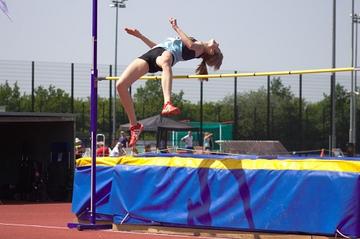 Teele at the joint Oxford-Cambridge match against Harvard-Yale