Around the World in 12 Folk Tunes

Around the World in 12 Folk Tunes 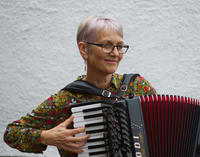 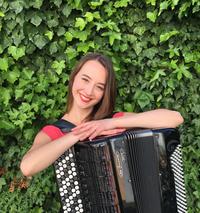 Ilona and Karen performed an hour of well-known and popular folk tunes from around the world and across the continents.

Ilona has played across the UK, working with orchestras including the Philharmonia, BBC Scottish Symphony Orchestra and Welsh National Opera. Karen has created a niche for herself on the accordion on the UK jazz scene and plays with her current jazz quartet, Streetworks.

Starting in Italy with a traditional tarantella, Ilona and Karen’s musical journey took us across Europe and then over to North America for one of the great American folk songs followed by the national dance or "hat dance" of Mexico. Later came 'Mbube' originally written in Zulu and known to many of us in a more popularised form as `The Lion Sleeps Tonight'.

The Jewish celebratory song, `Hava Nagila' represented Israel and `Waltzing Matilda' unmistakably symbolised Australia, often being referred to as its unofficial national anthem. Following this, an impressive rendition of the Chinese classic `Jasmine Flower' was skilfully adapted to the accordion.

There was also a poignant moment in the programme when `Kolomyika', a fast-paced Ukrainian folk dance was played, showcasing well Ukraine's national spirit and coupled with a thought from the performers for its people at this time. The final stop on this global musical tour was back home in Great Britain with the beautiful Elizabethan-era folk ballad "Greensleeves".

The performance was recorded in the studio - due to some technical difficulties with the livestreaming - and is available as an online video recording.

The video of the folk tunes concert can be viewed at this link.