St Cross Fellow by Special Election and creative director of Atlantic Productions, Anthony Geffen, is part of the ‘Five Deeps’ team recording five historic dives to the bottom of the world’s oceans as part of a documentary series for the Discovery Channel. The latest dive has seen expert diver, Victor Vescovo, descend a record-breaking 10.9km to the ocean’s deepest place: the Pacific Ocean’s Mariana Trench.

Vescovo spent four hours at the bottom of the trench in a submersible, designed to withstand deep-ocean pressure. He is the third human to make the dive, the first to make multiple dives there and his latest descent is the deepest by 11 metres, making Vescovo the new record-holder. 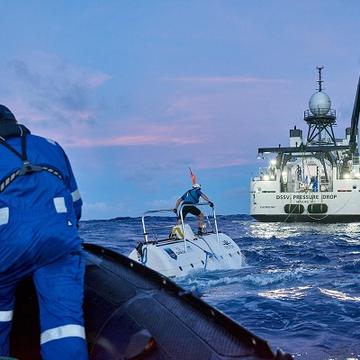 Scientists on board discovered what they believe are four new species of prawn-like creatures called amphipods living in the trench, and retrieved the deepest piece of mantle rock ever recovered from the surface of the western slope of the trench. They also discovered a plastic bag on the sea floor, a reminder of humanity’s impact on even the most remote places on earth.

Anthony Geffen said that this was the most difficult filming he had been involved with. He explained:

“It has been a monumental week for ocean exploration; we have broken world records and achieved a number of world firsts. Most importantly we have opened the door to the final frontier -- the exploration of the hadal zone and the workings of the deepest parts of the world’s oceans.”

The Five Deeps Expedition is the world’s first manned expedition to the deepest point in each of the five oceans. Having already tackled the Atlantic, Southern, Indian and Pacific Ocean, the final dive is set to take place in September 2019 in the Arctic Ocean. The documentary will air on the Discovery Channel globally in late 2019.