St Cross Fellow and Professor in Biological Physics, Achillefs Kapanidis, has won the BBSRC Innovator of the Year Award for developing the innovative Nanoimager. He received the award jointly with DPhil student, Bo Jing, at a ceremony held at the Science Museum in London on 15 May 2019.

Part of UK Research and Innovation, BBSRC Innovator of the Year recognises and rewards individuals and small teams who have innovated in their research with a commercial, social or international impact. All researchers funded by the Biotechnology and Biological Sciences Research Council (BBRSC) can apply each year for one of four categories. Professor Kapanidis and Bo Jing topped the ‘Commercial Impact Category’ as well as receiving the BBSRC award as overall winners.

The award was won for their work on a desktop super-resolution microscope called the Nanoimager. About the size of a shoebox and much smaller and cheaper than current alternative microscopes, the Nanoimager can differentiate objects spaced as close as 20 nanometers apart (a distance 200 times smaller than the length of an E. coli bacterium) and can watch reactions in real time, even in living cells. This means it has the potential to screen new drug molecules or develop small biosensors to detect pathogens and spot now-hidden diseases. 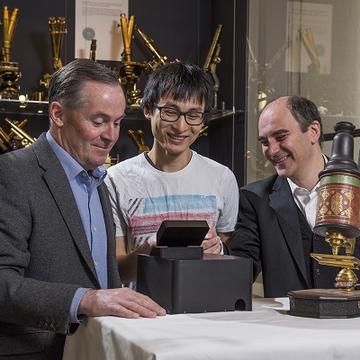 The spin-out company of the Department of Physics that is developing the Nanoimager is called Oxford Nanoimaging (ONI). Local workshops are used for manufacturing, stimulating the local economy and bringing investment to Oxford. There is interest already from laboratories and companies and it is hoped that the Nanoimager will drive further innovation in academic and industrial labs worldwide.

Professor Kapinidis said: “Being a finalist along with my co-inventor Bo Jing makes me proud and very happy, since it serves a tangible recognition of our long-term efforts and success of the spin-out company that commercialized our innovation. We are also excited about the opportunity to display, discuss and celebrate innovation at this fantastic BBSRC event.”

You can find more information about the Nanoimager here.