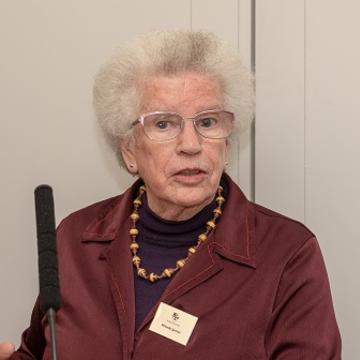 Wendy James recently retired as Professor of Social Anthropology at Oxford, having previously taught in the Universities of Khartoum, Aarhus, and Bergen. Her career has been distinguished by her election to a Fellowship of the British Academy (1999), the award of an Honorary D.Sc. by the University of Copenhagen (2005), and of the Rivers Memorial Medal of the Royal Anthropological Institute (2009). A member of the one-time SSRC (1976-80), she also served on the council of the RAI (1977-79), on the committee of the Association of Social Anthropologists (1975-77 and 1997-2001), and the council of the Hakluyt Society (1995-99). She was elected President of the RAI from 2001-4, and continues to chair the RAI's Publications Committee, founded 2004. Since 2001 she has also continued her role as Vice-President of the British Institute in Eastern Africa.

Wendy originally read Geography at St Hugh's College, taking up anthropology on graduation. Her election as a Fellow of St Cross in 1972 was combined with appointment to a University Lecturership in Social Anthropology (later converted to a titular Professorship). From then until her retirement in 2007, her main contribution was to post-graduate teaching and doctoral supervision, alongside her role in promoting and supporting the undergraduate degrees of Human Sciences, and of Archaeology & Anthropology, since these courses were founded. The experience of teaching the wide range of students taking these degrees broadened Wendy's own interest in the relevance of today's anthropology to human history as a whole. She was honoured to have the opportunity to assist in the editing of some of R.G. Collingwood's unpublished work, and also to support the British Academy's Centenary Project "From Lucy to Language" through serving as an external member of its Management Committee (2003-10).

Wendy's own primary research was carried out in Africa, mainly in the Sudan and Ethiopia, where the methods of traditional ethnography have had to find accommodation with those of history. The circumstances of recent conflict and displacement have also led to Wendy's engagement with issues in humanitarian assistance. She acted as anthropologist for a documentary film set among Sudanese refugees in Ethiopia (Granada TV's Disappearing World: ‘Orphans of Passage', 1993); served between 1991 and 2000 as occasional consultant to bodies such as the UN Operation Lifeline Sudan, the UNHCR, and development NGOs; as well as acting as a resource person on behalf of the FCO in official peace negotiations over the Sudanese civil war in 2003.

In June 2011, Wendy was recognised in the Queen's birthday honours list and awarded a CBE for her services to Scholarship.

Wendy's husband, Douglas H. Johnson, is a historian and publisher who also specializes in Africa. Now that their children are grown up, Wendy has a little more time for her hobbies, gardening and travel (though still working on some publications in the pipeline, and tackling the large question of creating a searchable digital archive of her African audio and visual materials).